Iron Maiden singer Bruce Dickinson’s film about occult legend Aleister Crowley (infamous as “the wickedest man in the world”) has finally gone into production, according to Fangoria. Produced by London-based Focus Films, the movie, entitled “Chemical Wedding“, stars Simon Callow — of “Amadeus”, “Shakespeare in Love” and, appropriately, “The Phantom of the Opera” — as a Cambridge professor who becomes a reincarnation of Aleister Crowley (a role that, at various points, Malcolm McDowell and Roger Daltrey were said to be attached to); John Shrapnel, Kal Weber, Terence Bayler and Geoff Breton also star.

Crowley, who lived between 1875 and 1947, has been Bruce Dickinson’s idol for many years. The IRON MAIDEN song “Revelations” is said to refer to Crowley’s classic claim that he was the “anti-christ 666” reincarnated. In other words, the Devil himself.

Although Bruce isn’t planning a successor to his 2005 solo album “Tyranny of Souls” in the break before MAIDEN’s next summer tour, he doesn’t rule out getting together with producer/guitarist Roy Z to work on some new music for the soundtrack. 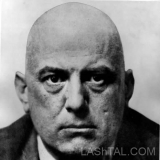