Variety has reviewed the rather wonderful Anger Me documentary…

Anger also summons the spirit of his occult mentor, the Gnostic magician Aleister Crowley, whose beliefs and practices inspire some of the more decadent rituals in the filmmaker’s oeuvre, ending the docu on a suitably satanic note.

Read on for more of the review and a link to the online article. The LAShTAL.COM review of the showing of the movie in London back in October 2006 is available here.

This curiously straightforward, almost demure docu basically seats the inimitable Kenneth Anger, experimental filmmaker extraordinaire and author of the infamous “Hollywood Babylon” tell-all books, in front of the camera and allows him to recount his experiences while long excerpts from his films unspool behind him. Apparently feeling less is more, helmer Elio Gemini only occasionally furnishes photographs or specific clips to illustrate Anger’s monologue, seemingly content to leave the septuagenarian enfant terrible to his own devices. Docu, which opened Friday at Gotham’s Anthology Film Archives, mainly functions as an adjunct to the Anger canon.

Quite aside from his trailblazing cinema, Anger led a rather star-spangled existence, starring as a child alongside Mickey Rooney and James Cagney in 1935’s “A Midsummer Night’s Dream,” and later hobnobbing with the likes of D.W. Griffith, Alfred Kinsey and Jean Cocteau. Propelled into the avant-garde limelight at age 17 with his brilliant, homoerotic “Fireworks,” Anger was invited to Paris by Henri Langlois and was soon editing Eisenstein’s unfinished masterwork “Que viva Mexico” in the bowels of the Cinematheque.

Anger’s seminal output of the ’50s, ’60s and ’70s, projected on a large screen behind him, largely speaks for itself, though the helmer’s ongoing soliloquy sometimes intersects directly with the footage, his commentaries ranging from the purely anecdotal to the lightly metaphysical.

Excerpted films include “Inauguration of the Pleasure Dome,” with its garishly clad gods and goddesses and its intricate matte superimpositions; “Eaux d’artifice,” his Vivaldi-themed 17th-century hide-and-seek walkabout amid the fountains of the Villa d’Este; the long-lost black-and-white suicide dream “Rabbit’s Moon”; the famed “Scorpio Rising,” whose needle-drop pop track would forever change movie music; and the Mick Jagger-scored “Invocation of My Demon Brother,” a darkly dissonant walk on the wild side composed of fragments rising, phoenix-like, from the remaining reels of “Pleasure Dome.”

Anger also summons the spirit of his occult mentor, the Gnostic magician Aleister Crowley, whose beliefs and practices inspire some of the more decadent rituals in the filmmaker’s oeuvre, ending the docu on a suitably satanic note. 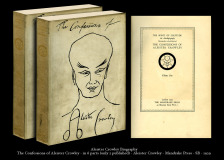