For those of you who are interested in Crowley’s Mountaineering career and/or having enough cash at hand (hardly after the latest Weiser catalogues):

The interesting part is that the books are accompanied by a photograph album containing 606 original photographs. I presume that chances are good that there might be an unknown photograph of Aleister Crowley amongst them, other than the famous one with beard which can be seen here: http://www.lashtal.com/gallery/displayimage.php?pos=-13

I will try to maybe attend one of the previewing sessions and find out more, but it will be 400km drive, so maybe someone here on the forum lives nearer and wants to give it a try. You can find details here: http://www.reiss-sohn.de/frame_buch.php?page=2189&lang=eng Reiss & Sohn Antiquarian Booksellers and Auctioneers, Königsstein, Taunus, Germany
On Sale on October 24th, Afternoon Session
Jacot Guillarmod, Himalaya. 2 vols.
Lot 2189
Estimate: € 7.500,-

Himalaya. – Jacot Guillarmod, J. Six mois dans l’Himalaya, le Karakorum et l’Hindu-Kush. Voyages et explorations aux plus hautes montagnes du monde. Album with 606 original photographs and first edition of the printed travel account from Jacots Himalaya expedition 1902. “Personal account of the expedition to K2 in 1902 led by Oscar Eckenstein. The expedition went up the Baltoro glacier and made the reconnaissance of K2 from NE-side. In 1905 the author organized the expedition to Kangchenjunga, but it ended in failure by an accident” (Y.). A considerable number of the original photographs contained in the album is reproduced in the printed monograph. – A few photographs somewhat faded, 1 photograph damaged, some browning or foxing to cardboards. The album on the whole very well preserved. Some foxing to plates and parts of text of the printed edition, maps and diagram loose, p. 353/354 misbound. Lacking 2 plates and probably 1 panorama. Bound in contemp. half-calf (album) and half-cloth (book), slightly rubbed. 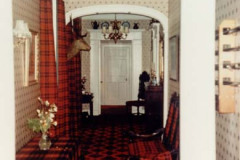