Those of us that spend time perusing Blogs, know that there’s been much criticism recently of the relative scarcity of newly published Crowley material. However…

I have received information from an utterly reliable source of an extraordinary number and variety of Crowley items in the process of being prepared for publication, and it makes very exciting reading.

And: The Confessions – unabridged! And for an example of just how wonderful this is going to be, read on for an extract…
The first paragraph appears in the currently available edition (page 505), but the subsequent four paragraphs – amongst the best by Crowley that I have read – were excised, for reasons that are unclear to me.

I close this chapter with a sigh. For ten years my life had been a delirious dance to a maddening music with incarnate passion for my partner, and the boundless plain of the possible vibrating with the fervour of my feet. I had come through a thousand crises to the climax of my career. I had attained all my ambitions, proved myself at every point, dared every danger, enjoyed every ecstasy that earth has to offer; the rest of my life recedes from romance in that boyish idea of what romance should be. From this time, though much lay in store for me to accomplish, summit soaring beyond summit of spiritual success, giant ranged behind giant for me to challenge, I now learn to look upon life with enlightened eyes. I had sought and I had found. I must now seek them who seek, that they might also find. I must aspire, act and achieve, not only for myself to perfect my personality, but for my fellow-men in whom alone I could possibly fulfil myself since I knew myself at last, not to be Aleister Crowley, an individual independent of the communion of cosmic consciousness, but merely one manifestation of the Universal Mind whose thoughts must be sterile unless sown broadcast to blossom and bear fruit in every acre of God’s Vineyard.

I close this chapter as if it were the portal of the vault wherein my individual life is buried, and there must always be a certain sacred sadness in bidding farewell to one who seemed so many years to be so intimate a friend as truly to be accepted as one’s alter ego, only to prove at last a phantom, unsubstantial as the shadow of smoke. And he being lost forever: Is it not lonely to be the Universal Self and therefore know no alien selves by which to know oneself: How easy it is to work when one is conscious of the result; how hard, when all one does is spent in space; its effect not to be measured, rarely even to be known: Thus all the years that lay behind seem on the surface splendid with great designs and rich rewards. The future seems an intelligible text written in indecipherable characters. My personal adventures are no longer so brilliant; my objects grow obscure, my path perplexed; I find myself no more in the history of Aleister Crowley. What happens to him is no more than what happens to any other man, monkey, mulberry or mud heap. I am merely a ferment working to leaven the world.

The interest of this record will therefore be wholly objective, certainly to my consciousness, and I hope to that of every reader. There will appear a catastrophic change in the point of view. Aleister Crowley will still bob up his ugly head now and again, to be knocked down again as soon as he is detected. But the true man will only appear in the souls of those who surround him. The failure of A, the treachery of B, the madness of C, the death of D, the outburst of E’s genius, the attainment of the magical power of F, G’s perception of truth, and the emancipation of H’s Will—in these shall we find, and by these may we judge, the life of Aleister Crowley. The misunderstanding of his message will tell us a part of the truth. The neglect of some, and the persecution of others, will tell us another. But we shall only reach to his reality by observing the development of those few men and women who have recognized him as an expression of their own inmost and holiest nature, and by sympathy, understanding and intelligent effort, incarnated the idea of him in their own persons so as to make him manifest as a sensible form of their own genius, modified in each case by the peculiar characteristics of their minds.

I am reminded of Browning’s A Soul’s Tragedy—Act First, being what was called the Poetry of Chiappino’s Life; and Act Second, its Prose. Does it seem as if I were in the same boat? Is my d’Artagnan youth, with its dash and daring, its chivalrous challenges and its vivid victories, to rank as my life’s champagne; and my Richelieu age, with its patience and perseverance, its resolute resistance and its crownless conquest, to pass for its cocoa? The droning dynamo is in reality livelier than the coruscating rocket, and the stubborn struggle more adventurous than spectacular ambition. I have found satiety without satisfaction in success, and rapture without regret in working without thought of result or reward. Today I look back on those wonderful days of wandering and wondering with infinite fondness — they blossom with unspeakable beauty; they the slow secret ripening of their fruit — present sustenance and sweetness with surety of seed for increase and immortality in the future—is happier and holier still; I sigh not, seeing their petals fallen to earth, but swell the stern strains of my marching song more strongly than ever I did the glad gay trills of my madrigal at sunrise. E pur si muove: The music of the motion of the Universe is a symphony more sublime than the cock crowing which supposed the sun and the stars to be servile satellites of the egregarious [sic] earth.

With these words I close the career of the man, Aleister Crowley. Was it worthwhile? He got pretty well all he wanted, and found no fruit thereof: safe in this way—that having expressed himself in all these many manners, he was able to understand the formula of the powder of projection which he was able to throw into the crucible where lay the molten metal of mankind whose baseness he designed to transmute into pure gold. The reader can well judge by now the character of Crowley. It remains for him to observe the effects of injecting that character into the veins of the fevered body of civilization. 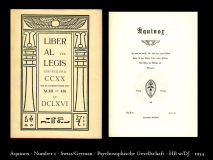