Remarkable items in the new catalog from Weiser Antiquarian…

This catalog comprises an interesting collection of out-of-print and rare books by and about Austin Osman Spare (1886-1956), as well as a number of small original artworks and related materials, most of which were recovered from his former home in Wynne Road, Brixton, shortly before it was demolished in the late 1960s.
The catalog starts with a new issue of The Book of Automatic Drawings, a magnificent previously unpublished sketchbook dating from 1925 that was finally put into print by three friends: Ian Kenyur Hodgkins, Roy Curtis-Bramwell, and Ian Law in 1973. In addition to a trade edition (examples of which are listed in section three of the catalog) the trio also had two hundred sets of sheets of the book printed on hand-made paper, which they planned to use for a special edition, each copy of which would be bound in quarter leather, and posthumously ‘autographed’ by Spare by way of a signed check – a large number of which had been found in his former Wynne Road residence. Unfortunately their finances did not prove up to the cost, and only a tiny number of the leather edition were ever bound. Surprisingly a number of the sets of unbound sheets (and their attendant checks) survived, and have shown up for sale from time to time over the years. What must surely be one of the last of these caches of sheets forms the basis of this new issue. As was originally intended, this new issue is handsomely bound in quarter leather, and has a check signed by Spare tipped in. It also includes a brief Afterword by Roy Curtis-Bramwell written especially for this issue, in which he outlines the history of the book.

Section two of the catalog features brand new copies of two works by William Wallace: The Early Work of Austin Osman Spare, 1900-1919, and The Later Work of Austin Osman Spare, 1917-1956. Both are quality productions, with color plates, that were printed in quite small quantity in the late 1980s. They are arguably amongst the first scholarly studies to be done of Spare and his artistic influences, and played an important part in the ‘rediscovery’ of Spare and his art by a new generation that began in the 1970’s and gathered momentum in the decades thereafter. We recently acquired a small number of copies of each, including a few signed copies of The Early Work.

The third section of the catalog contains a good selection of works by and about Spare, including a number of the beautifully produced Fulgur publications, some quite spectacular Golden Hind magazines, most of which have a number of large illustrations by Spare, including, in one instance, a huge double-page lithograph. The section also includes several unusual books with Spare’s artwork, notably Wainwright’s Poems and Masks and Grindrod’s The Shadow of Raggedstone as well as First Editions of The Focus of Life and The Book of Pleasure.

The fourth and final section of the catalog comprises a number of small original artworks, photographs, and other ephemeral items, most of which were recovered from Spare’s Wynne Road house. The items include several small but beautifully executed portraits that Spare presented to Ada Millicent Pain: the one woman for whom he seems to have had any real affection, a significant group of catalogs for his exhibitions: some of which have annotations in his own hand, and a small collection of material – photographs, a letter, and a rough sketch – relating to a portrait of the great composer and musician Igor Stravinsky that Spare executed. Perhaps the most poignant of the items in this last section is a heavily worn letter authorising Spare to act as a ‘fire spotter’ at Collier’s Department Store during the blitz. It was of course whilst so engaged that Spare was injured and nearly killed by a bomb blast.

Again, if you wish to view the books in this current catalog simply click on: www.weiserantiquarian.com/catalog 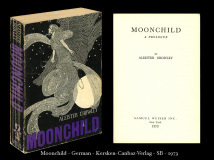