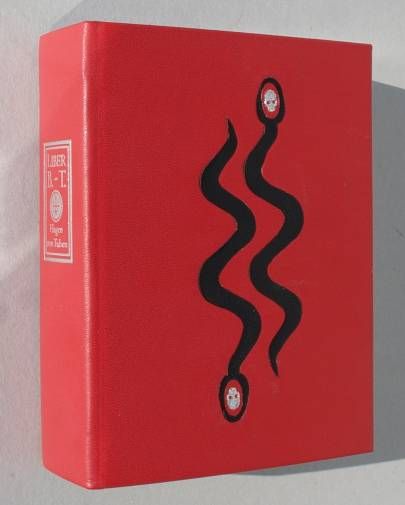 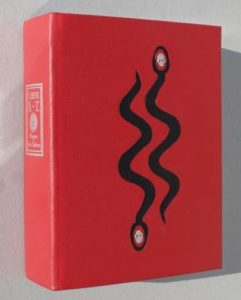 To make manifest the natures of the work, there are two versions; one predominantly black with red insets, the other predominantly red with black insets. The endpapers are of Himalayan paper with a doublure panel inset into the pastedown which is made from to layers of pure silk organza. The netlike weaves of these layers create shimmering interference patterns that move as the book is handled. They also give an impression of depth, that one is looking into the book’s covers. The shimmering is carried on with the edges of the pages which are blocked with a holographic pattern.

This graphic grimoire is a manifestation of the Saturn Gnosis as taught by Michael Bertiaux who contributes an Introduction and Afterword, the latter being the record of a séance that was intended to secure the voudon passporté that secures access to the realms articulated in the book. The passporté was then realised through full colour automatic art by Bertiaux – it is reproduced in the back of the book for the use of the reader. As with many mundane passports, the passporté is laminated.

The original artwork which forms this grimoire was executed in a variety of techniques including pen and ink, papercuts and digital formats. Its spiritual and symbolic form is designed to enable the deeper realms of the unconscious and its attendant powers to be realised. Twenty five of the talismanic images in the book are manifested in metal, being blocked in silver coloured metallic foil upon a background of pure silk. The silk plaque is then embedded in the page.

Orders should be made to ben@caduceusbooks.com

Images of the book and slipcases can be found here: http://www.caduceusbooks.com/B-T-text.htm

Copies are being made to order, the number of reservations received will determine the final print run. So far 180 copies have been ordered and all 25 of the deluxe clamshell slipcase have now sold. Purchasers may order now and pay when their book is ready to ship. Also they can specify whether they desire their copy to be bound in predominantly red or black leather. The print run will be decided in three days time.