Aleister Crowley artworks on show this month in New York

An English artist, mystic, ceremonial magician, poet and occultist, Crowley revelled in his notoriety, pleased that the press labeled him ‘the wickedest man in the world’ and ‘The Beast 666’. In 1920, Crowley travelled to Cefalu, Sicily to establish The Abbey of Thelema. While there he created a central room which became known as The Chamber of Nightmares. He painted the walls with a range of images designed to challenge his students. “The purpose of these pictures,” wrote Crowley, “is to enable people, by contemplation, to purify their minds.” While the Abbey itself is now lost [sic.], a handful of the artworks remain.

These rare and newly discovered works on show were previously exhibited at the Pompidou Centre and Palais de Tokyo, Paris, before making their way to Australia as the national touring exhibition, The Nightmare Paintings.

The works are presented by New York dealer, Marion Harris in association with the Australian curator and President of Collective777, Robert Buratti.

“Crowley’s work is catching the eye of major curators and museums across the world, and his work was recently showcased at the Venice Biennale, curated by New York’s New Museum director, Massimiliano Gioni” says Buratti. “He is on everyone’s radar again and the public response to his work is always amazing.”

“Crowley’s artistic life began in New York with his first exhibition in 1917. He fast became part of the local art scene rubbing shoulders with painters like Robert Winthrop Chanler, so its great to bring some of his later works back here to complete the circle.” says Buratti. 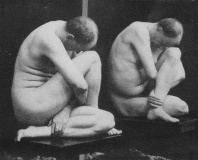