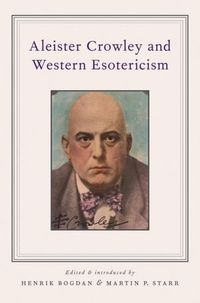 Visitors to this site will be as excited as me by the announcement of the publication of:

This volume is the first comprehensive examination of one of the twentieth century’s most distinctive iconoclasts.

Aleister Crowley (1875-1947) was a study in contradictions. Born into a fundamentalist Christian family and educated at Cambridge, he was vilified as a traitor, drug addict, and debaucher, yet revered as perhaps the most influential thinker in contemporary esotericism. Moving beyond the influence of contemporary psychology and the modernist understanding of the occult, Crowley declared himself the revelator of a new age of individualism. Crowley’s occult bricolage, Magick, was an eclectic combination of spiritual exercises drawn from Western European magical ceremonies and Indic sources for meditation and yoga. This journey of self-liberation culminated in harnessing sexual power as a magical discipline, a “sacrilization of the self” as practiced in Crowley’s mixed masonic group, the Ordo Templi Orientis.

The religion Crowley created, Thelema, legitimated his role as a charismatic revelator and herald of a new age of freedom. Aleister Crowley’s lasting influence can be seen in the counter-culture movement of the late 1960s and early 1970s and in many forms of alternative spirituality and popular culture. The essays in this volume offer crucial insight into Crowley’s foundational role in the study of Western esotericism, new religious movements, and sexuality.

• Comprehensive examination of an understudied thinker

“One would be hard-pressed to put together an assemblage of people to equal the scholars included in this collection-the cream of the crop of those esoteric scholars who have studied Crowley. The volume makes a significant contribution to esoteric studies and will set future debates about Crowley. It will be a must-read text for all esoteric scholars in the next generation.” — J Gordon Melton, Distinguished Professor of American Religious History, Baylor University

Henrik Bogdan is Associate Professor in History of Religions at the University of Gothenburg. In addition to numerous articles, he is the author of Western Esotericism and Rituals of Initiation (2007) and editor of Brother Curwen, Brother Crowley: A Correspondence, by Aleister Crowley and David Curwen (2010).   Martin P Starr was the editor of the Teitan Press series of the works of Aleister Crowley which appeared between 1985 and 2003. He is the author of The Unknown God: W. T. Smith and the Thelemites (2003), the first academic study of Aleister Crowley’s followers in the USA.