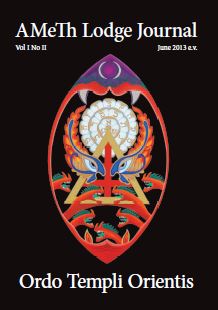 AMeTh Lodge Journal II is here! You are cordially invited to the launch party at the Atlantis Bookshop, 49a Museum Street, London WCIA ILY on Friday, 19 July, e.v., from 7.30pm – Save the date!

This fabulous, high quality, beautifully printed and bound second issue of the Lodge’s Journal should not disappoint!:

For the first time, in this issue – an article by a guest author who is not a member of O.T.O.: a fascinating study of Aleister Crowley’s trip to Russia with his troupe of Ragged Ragtime Girls, written by Geraldine Beskin

This edition also offers an eclectic selection of rituals written and performed by Lodge members for the reader’s delectation:

An interview with the eminently edifying Lon Milo DuQuette, who offers his own unique view on a whole host of magical topics mercilessly hurled at him by his interlocutors.

All is adorned by excellent artwork and photographs created by Lodge members and printed in full colour, including the magnificent image which graces the front cover of this second issue.