An Unpublished Novel by Ithell Colquhoun

Ithell Colquhoun’s occult novel I Saw Water has just been published for the first time.

The action takes place in and around a convent on the Island of the Dead, but its spiritual context derives from sources as varied as Roman Catholicism, the teachings of the Theosophical Society, Goddess spirituality, Druidism, the mystical Qabalah, and Neoplatonism. It is informed throughout by Colquhoun’s own personal experiences of magical rituals and teachings gained by her membership of societies that included the O.T.O.; the Saint Église Celtique en Bretagne; the Fellowship of Isis, the Theosophical Society, co-masonic lodges, and others.

More information can be found here:

Composed in the 1960s, I Saw Water consists largely of material taken from the author’s dreams experienced over the preceding twenty years. The novel challenges such fundamental distinctions as those between sleeping and waking, the two separated genders, and life and death.

The book also includes a number of essays, poems and illustrations of artworks, many previously unpublished, that help place the novel in the broader context of Colquhoun’s work. An introduction, bibliography of Colquhoun’s publications and extensive footnotes complete the volume. 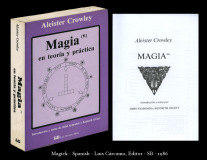