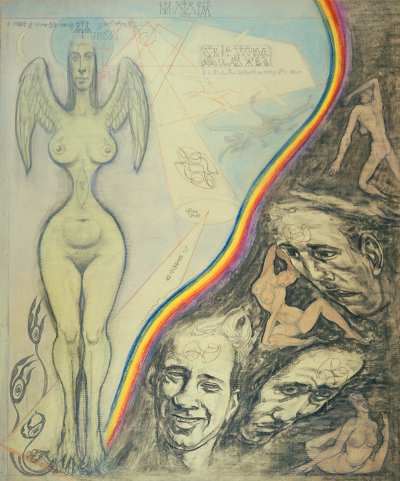 First exhibited at the Archer Gallery show in 1955, Man Is A Bundle Of Ids was acquired by Kenneth and Steffi Grant shortly after and has been in their possession ever since. The image formed part of a twelve-picture series that Spare called Contexture of Being.

Perhaps no other work from Spare’s late period better captures his gift for composition and draughtsmanship nor contains so many of his key artistic styles and methods, all in the one image. The work so enchanted Kenneth Grant that he later wove it into his own writing, with the picture forming a  bridge of sorts between The Ninth Arch and Against The Light.

The image has been reproduced to the highest standard using archival-inks and color-matches the original.