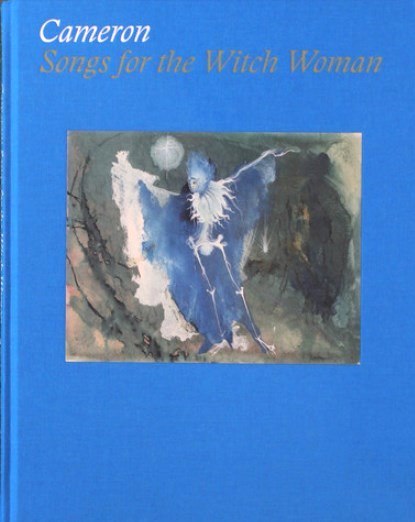 Cameron: Songs for the Witch Woman

Hardcover. 4to. 80pp. Fine blue cloth with illustrated paper panel on upper board, spine and upper board lettered in white and gold. Colour frontis, and over 75 full colour illustrations, many of them full page plates, List of Exhibits.

The beautifully illustrated catalogue produced by the Cameron Parsons Foundation in conjunction with the exhibition entitled “Cameron, Songs for the Witch Woman”, which was held at the Los Angeles Museum of Contemporary Art Design Center from October 11, 2014 to January 11, 2015. $45.00 plus shipping.

The exhibition comprised approximately 91 artworks and ephemeral artifacts by or relating to the Californian artist and occultist, Marjorie Cameron (1922 – 1995), generally known simply as “Cameron.” After serving in the U.S. Navy during the Second World War, Cameron settled in Pasadena, where she met the rocket engineer and occultist Jack Parsons, who had recently begun a series of magical rituals aimed at invoking an aspect of the Divine feminine: Babalon. Parsons – who was convinced that Cameron’s sudden appearance was linked to that ritual – married Cameron in 1946, and the two maintained a tempestuous, if unconventional relationship until Parson’s untimely death in 1952.

Cameron went on to become a significant figure in the postwar Los Angeles artistic and countercultural scene, where she wrote poetry, painted, and acted in several films (including Anger’s “Inauguration of the Pleasure Dome.”) Much of her art, with its unusual and unworldly imagery, was clearly an expression of her occult explorations. The exhibition was organized by guest curator Yael Lipschutz, with the assistance of MOCA Senior Curator Alma Ruiz, and was the largest survey of Cameron’s work to be held since 1989. The main essay is written by Yael Lipschutz and the foreword by MOCA Director, Philippe Vergne, with contributions by William Breeze and Susan Pile.

(Note: This is not “Songs for the Witch Woman” published by Fulgur)
Place your order direct via secure website at: