The Law is out there!

For those of you interested to know what is hot on the O.T.O./Thelemic scene throughout the world, the members of the Secret Fire Oasis from Skopje, Macedonia, working in close collaboration with ALEF Skopje, a civic association for study, promotion and preservation of the world’s esoteric traditions – are proud to announce a two-part magickal weekend event hosting the renowned Thelemic author and artist Carl Abrahamsson, who will give a lecture titled “The Magic of Dreams Made Real” and perform as part of the Swedish musical duo Cotton Ferox the following day, for a maximum magick radiation directed towards the curious Skopjanians. 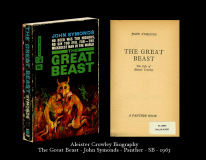