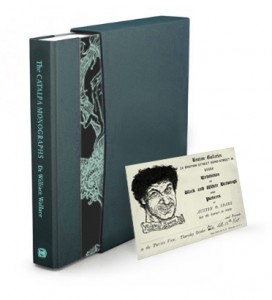 Featuring 93 colour images and 50 unpublished artworks by Spare this book expands upon the books first publishing in the 1980s. The author returns to his earliest writing as the basis for a newly updated inquiry into the volatile essences of Spare’s art. This is a substantial and thought-provoking book by the most prolific contributor to Sparean scholarship.

Comprising a revised and much expanded republication of the long out of print books ‘The Early…’ and ‘The Late works of Austin Osman Spare’, it also includes 20 very early ink drawings from a recently discovered private collection. An extensive new introduction analyzes the themes and obsessions in Spare’s art, including palimpsests and Realism.

Decades of fastidious research have yielded many insights and revelations which are now elucidated with many references to surprising source imagery. By immersing himself in Spare’s creative impetus Wallace has explored not only occult texts and alchemical art, but has also found a rich vein of reference and allusion to the biblical texts, and the art of Blake, Hogarth and Shakespeare.Crucially the reader is now furnished with the solutions to several iconographical enigmas; there is an in-depth examination the Mrs Paterson myth, ‘Black Eagle’, and the first convincing decoding of  the ‘L.C.O’C.S’ dedication of The Focus of Life.

Dr Wallace also comments on an unpublished early political cartoon of Chamberlain, as well as reproducing correspondence between Kenneth Grant, and an affectionate memoir of Frank Letchford.

The Foreword is provided by Michael Staley; the Afterword by Stephen Pochin, who examines Spare’s life-long appropriation of artistic motifs, from Egyptian to G.F. Watts, to Rodin and George Tinworth.

This vital new addition to Sparean scholarship confirms he remains at the top of his game.