DIED 3 YEARS AGO. Daily Telegraph Reporter. The name of Mr. Edward Alexander Crowley, 72, who died near Hastings in 1947, appeared in last night’s London Gazette. He was said… Read more »

SUNDAY DISPATCH 13TH APRIL 1934 BY THE MARQUESS OF DONEGALL The Missing Book. Last time I saw Aleister Crowley, he was more interested in a new game he had invented… Read more »

THE LEGEND OF ALEISTER CROWLEY. A FAIR PLEA FOR FAIR PLAY. The portly and voluminous  poet, mystic, magician, explorer, scholar and publicist, Aleister Crowley, here  has his Legend given to… Read more »

FAMOUS MYSTIC OR HIS DOUBLE? Message Pinned To Mouth Of Cave : Vanished Couple.  A mysterious note pinned to the entrance to a cave known as Hell’s Mouth, 20 miles… Read more »

BERLINNER TAGEBLATT. Translation: In Berlin arrived : ALEISTER CROWLEY. This fifty-five year old personality is at present staying amongst us, in  order to prepare for the exhibition of his paintings… Read more »

THE UNIVERSITIES. A LECTURE INCIDENT. ALLEGED BANNED LECTURE. The cancellation of Mr. Aleister Crowley’s lecture to the Poetry Club has naturally caused a certain amount of interest, the more so… Read more »

AN OXFORD SENSATION. I think it is true to say that never has so small a society received so much publicity throughout the length and breadth of England as has… Read more »

A CANCELLED LECTURE AT OXFORD. MR. ALEISTER CROWLEY. “DISCIPLINARY ACTION” WOULD BE TAKEN. An extraordinary situation has arisen in connection with the Oxford University Poetry Society. A meeting had been… Read more »

BIRMINGHAM GAZETTE OXFORD BAN on LECTURE. “DISCIPLINARY ACTION IF DELIVERED.” COPIES TO BE SOLD. An extraordinary situation has arisen in connection with the Oxford University Poetry Society. A meeting had… Read more »

MIXED MAGIC MOONCHILD. By Aleister Crowley. Mandrake Press. 10s 6d.net. A sub-title to “Moonchild” are the words “A Prologue.” We take this to mean that Mr. Aleister Crowley will produce… Read more » 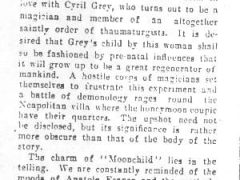 ABERDEEN PRESS JOURNAL FANTASY AND GENIUS. MOONCHILD, By Aleister Crowley. Mandrake Press : 10s 6d. “Moonchild” is one of the most extraordinary fantastic yet attractive novels we have read. A… Read more » MAGIC AND WAR. “MOONCHILD”By Aleister Crowley. (The Mandrake Press, 10s. 6d.) We have an unusual measure of genius in the phrases born of the author’s fancy, but the mystical in… Read more »

BLACK MAGIC DENIED. FORMER SPY’S EXPLOITS. ORDERED TO QUIT PARIS. An Englishman, against whom there are accusations of having practised black magic and of offences against decency, has been ordered… Read more »