Maybe we’ll never know exactly what happened during September 1930 when Edward Alexander (a.k.a. Aleister) Crowley was visiting Lisbon and the nearby areas, in the company of Fernando Pessoa. The… Read more » 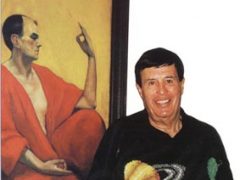 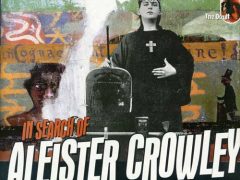 Fifty years after his death, the mention of Aleister Crowley’s name can still evoke strong reactions. Some people believe he was an evil Satanist while others dismiss him as a… Read more »

SUPERSTAR singer Robbie Williams has turned to a Midland master of the occult in his desperate bid to find love and overseas fame. The Stoke-on-Trent star’s new album features a… Read more »

“Flexipop” was a weekly popular music magazine in the UK published in the early 1980s. Usually packed to the rafters with ephemeral nonsense – pop music lyrics and the like… Read more »

FORGET what your bible tells you. The number of the Beast isn’t 666 – it’s 30 Clarendon Square, Leamington Spa. That was the Warwickshire birthplace and early home of the… Read more »

Daily Mail, Friday, January 6, 2006 by Glenys Roberts THE WORKMEN demolishing one of central London’s Victorian buildings were edging their way along the dark corridor. Above them was the… Read more »

Introduction Like many occultists, I avoid mentioning my practices to my secular friends wherever possible. one reason is the association most people seem to have between ritual magick and human… Read more »

My thanks to Excoriator for supplying the following Crowley-related scan from The New Age magazine. These files are in PDF format and require that you have Acrobat Reader installed. The… Read more »

My thanks to Excoriator for supplying the following Crowley-related scan from The New Age magazine. These files are in PDF format and require that you have Acrobat Reader installed. The… Read more »

“The Worst Man in the World” Black magic is not a myth. It is a totally unscientific and emotional form of magic, but it does get results — of an… Read more »

The Great Beast – Aleister Crowley by Robert Anton Wilson O – The FoolAll ways are lawful to innocence. Pure folly is the key to initiation.– The Book of ThothCrowley:… Read more »

HOUSE OF EVIL. Malcolm’s chilling nights of terror in Beast’s Lair. By Nick Hunter. As the setting sun slips behind the hills of Loch Ness, lights from the crofts and… Read more »

Symphony for the devil As an exhibition celebrates his Invocation of My Demon Brother, the film director Kenneth Anger talks to Morgan Falconer about Mick Jagger, all-meat diets and seeing… Read more »

“I thought that everything that was vicious and bad had been produced at one time or another before me,” said Mr. Justice Swift, “but I have learned in this case… Read more »

I hear that the Magic Circle, as students of the occult, have acquired many of the writings of Aleister Crowley – arch-priest of the Black Mass cult – whose cremation… Read more »