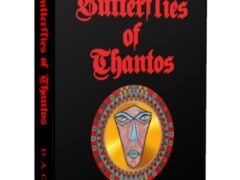 A brand new edition of D A Chitty’s obscure 70s Thelemic classic THE BUTTERFLIES OF THANTOS has just been released featuring full colour images of the surviving paintings as well as new paintings, chapters and introductions.

After decades of neglect, the British Surrealist and occultist Ithell Colquhoun’s unique vision and hermetic life have generated enormous interest amongst historians and practitioners of art and magic. In ‘Genius of the Fern loved Gully,’ the first in-depth biographical study of Colquhoun and her work, Amy Hale examines the magical and cultural confluences that shaped her imaginative life and artistic vision.