On the Rights of Man explores the history of Aleister Crowley’s Liber OZ in greater detail than ever before. Through careful examination of Crowley’s diaries and correspondences during the Second World War, a fascinating narrative emerges that, up until now, has never been told.  In a separate section, Frater Orpheus discusses the significance of its title and number, how its principles can be applied to the Tree of Life, and its connection to five magical formulas which reveal deeper mysteries. 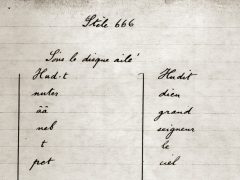 God Osiris sits on the throne and the balance with its two pans is put in front of him. In one of the two pans, there’s a feather of justice; which is known as “Maat”. In the corresponding pan, the heart of the dead person is placed. If the heart pan is heavier than the feather pan, the dead person crosses safely to the afterlife and vice versa. Horus; son of God Osiris is there in every trial to give a helping hand to the dead person; whether man or woman.