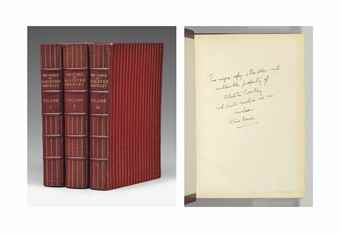 A truly wonderful (even if overpriced) edition of Crowley’s Collected Works is being sold at Christie’s on June 12 in New York:

Lot Description
CROWLEY, Aleister (1875-1947). The Works. Foyers: Ballantyne, Hanson and Co for the Society for the Propagation of Religious Truth, 1905-07.

THE AUTHOR’S COPY, THE ONLY KNOWN COPY PRINTED ON VELLUM, INSCRIBED BY CROWLEY on the front free endpaper: “This unique copy is the sole and inalienable property of Aleister Crowley and shall devolve as an heirloom to his heirs.” Crowley brought his library of approximately 125 books and manuscripts to the United States in 1914 in hopes of selling it to John Quinn, the New York attorney, art patron and book collector. Quinn was not interested, and Crowley then set off around the US seeking members of the Masonic-related organization previously known as the O.T.O. or Ordo Templii Orientus or Order of the Oriental Templars, or Order of the Temple of the East. Crowley arrived in Detroit in 1918 to meet a businessman who agreed to distribute trade editions of Crowley’s many self-published works. He also came to the city to visit drug manufacturer Parke-Davis, which was preparing a batch of peyote extract that Crowley intended to use in O.T.O. rituals.

Crowley’s library was stored in the Leonard Warehouse in Detroit where it remained, unclaimed, until purchased in 1958 by Hearst writer and magic museum founder Robert Lund. Lund subsequently sold all but three items from, the library (the majority of the library is now in the Harry Ransom Center at University of Texas, Austin). See David Meyer, “Along Came Lund: One Magician Rescues the Library of Another,” in: Caxtonian, vol. XXII, no. 1, January 2014.