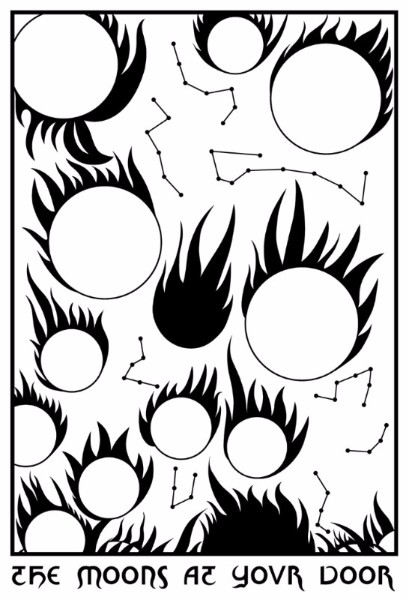 This from David Tibet:

We are OverAllTheMoons to announce details of an imminent anthology by David Tibet, released at the same time, and with the same title, as the new album by Current 93 93/93

The Moons At Your Door, published by the ever-wonderful Strange Attractor Press, is an anthology of the strange fiction and hallucinatory tales that have most moved David, and which have most influenced his work in all Spheres including, of course, Current 93 herself. It brings together unearthly stories by many innovators of the weird, whilst drawing attention to other little-known, and under-represented, scribes of the strange.

The book is published in two editions: a paperback edition of 2,000 copies, available from all Good and Bad bookshops everywhere, and a hardback edition of 500 copies, signed by David, which are available mail-order only from DavidTibet.com and Strange Attractor Press.

The hard-back edition is bound in cloth, with sewn signatures. Approximately 450 pages long, measuring 210mm x 148mm, it has printed endpapers by David, illustrating one of the stories that he has chosen in the book. It also comes with a chapbook of an extra story by Algernon Blackwood, with an illustration by David, and a surprise. These latter two items are only available with the hardback edition.

We will have 100 copies from the hardback edition of 500, and are taking pre-ordersnow, limited to one copy only per individual. Please note: the book is not published until mid-November, at the same time as the new album by C93. The book costs £30 plus P&P. The paperback edition is not available from us or from Strange Attractor Press.

David writes about the book:

I Fell In Love With The Moons, whom I had heard and seen at my door, when I was just a young boy in Malaysia. I have brought together, in this work, many of the short stories and texts that have made me what I am and what I will be. I have never tired of these works, which still move me profoundly. These are just some of The Moons At My Door. May they soon be At Your Door too.

As founder of the Ultimate Hallucinatory SuperGroup Current 93, David Tibet’s work as an artist and songwriter is widely known. His song cycles present a rich vein of ethereal imagery, arcane reference and the supernatural, creating their own sound-worlds of heartfelt and mysterious poignancy. The Moons At Your Door presents both a skeletal key to these domains as well as one small gateway into the world of supernatural fiction.