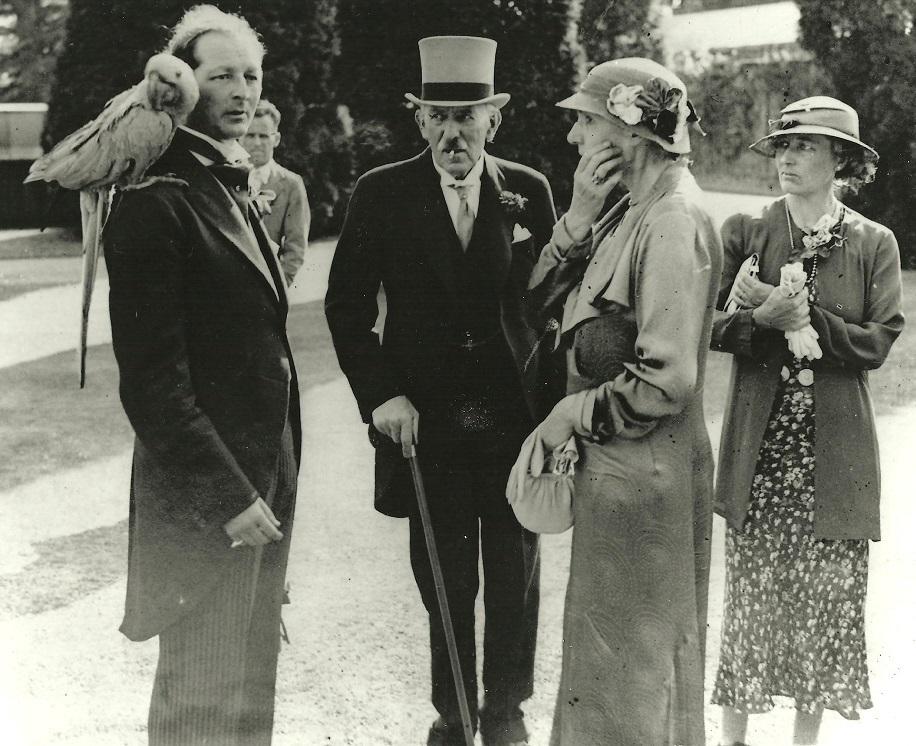 Evan Morgan was more than your average aristocrat. Famed for his eccentricity, he also practised black magic, kept an array of exotic animals, married twice to women despite being gay and often held lavish parties. TOMOS POVEY takes a look at the late peer’s colourful life.

THIS summer marked the 124th anniversary of the birthday of one of Newport’s most infamous residents.

There is a plethora of interesting characters dotted throughout Welsh history, but the fourth Viscount of Tredegar is certainly a captivating one.

The mere mention of Evan Frederic Morgan’s name was once rumoured to cause tongues to wag. Whether it was Evan’s eccentricity or notoriety that grabbed people’s attention will never be known.

But what can be agreed is this individual, who dabbled in black magic despite professing to being a staunch Catholic, was indeed an enigma and a true eccentric.

Evan was born in 1893 into one of Wales’ most wealthy aristocratic families, who for more than 300 years resided at Tredegar House, Newport.

He was one of two children – the latter whom died tragically at the age of 29 in London – to Courtenay Morgan, 1st Viscount Tredegar, and Katharine Carnegie.

Interestingly, before’s Evan’s bizarreness had become well known, the talk of the town focussed on his mother, who took her passion of ornithology to extreme levels – believing herself to be a bird.

After graduating from Christ College, Oxford University, Evan briefly worked for the minister of labour and then aspired to become a journalist but this ended in failure, where upon he turned his attention to becoming a priest.

Local historian Paul Busby, whose work concentrated on the lords of Tredegar, said that Evan had converted to Catholicism in 1919.

He said: “Throughout his life, Evan was always obsessed with death and converted to Catholicism in 1919 and became a passionate Catholic. He even became chamberlain to the Pope.

“In 1924 he decided to train for the priesthood but during the same year he was told he wasn’t cut out to becoming a priest.”

The Viscount-to-be’s life of contradiction would soon emerge as while serving the Pope and following the Christian trinity, he would simultaneously be practicing black magic.

He wrote: “Evan most liked to dress up as the poet Shelley, whose remains lay in Rome’s Protestant Cemetery, where Evan astonished onlookers by going into violent convulsions to communicate with the dead poet.”

There were whispers in Evans’ close circle of friends of his occult activities. In fact, he was actively involved in groups in London, where he used the pseudonym ‘Black Monk’.

“There was a lot of contradiction about him,” said Mr Busby, who also works at Tredegar House.

“I think it is important to note, though, that Evan was extremely intelligent and a very gifted individual.

“Evan was enthusiastic, and a genuinely passionate believer in whatever he happened to be doing at the time. When serving the Pope, he was a dedicated Catholic; when indulging in occult rituals he probably passionately believed in it, and wanted to be a great occultist.”

But it was Evan’s decision to strike up a relationship with occultist Aleister Crowley – who was known as “the wickedest man in the world” – that caught people’s attentions.

She said: “My nan worked at Tredegar House and my mum told me some of the stories she’d told her. My mum told me that nan said Evan had very distinct features – with a bird-like nose. He was an odd guy, that’s the impression I have of what I was told. He did have a lot of famous friends. Apparently he was a good friend of Aleister Crowley.

“I think eccentric and mysterious are the best words to sum him up.”

Evan’s life of contradiction continued when, despite being homosexual, he twice got married to women. His first betrothal was to actress Lois Sturt and the second to the Russian Princess Olga Dolgorouky. Both marriages ended in divorce.

Evan succeeded to the title and estate on his father’s death in 1934.

Despite having to pay the equivalent in today’s money of £75 million in death duties, the 40-year-old used his new position to continue a lavish and eccentric life style.

Tredegar House was soon full to burst with an array of animals, including a boxing kangaroo, parrot, alligator and baboon. The animals certainly entertained guests well during outlandish parties at weekends.

An average alcohol bill during one of Evan’s parties was said to amount to £250 (the equivalent of more than £15,000 in today’s money).

Yet this extravagant spending, coupled with paying out heavy death duties, took a major strain on the family’s wealth.

Evan had previously attempted to sell off part of the estate to balance the books, but this attempt was blocked by his uncle Frederic Morgan – later to become 4th Baron Lord of Tredegar – and his son John – the last of the Lords of Tredegar.

Mr Busby said it was important to note that Evan had “no boundaries”.

He said: “He was a fantasist and an eccentric. His eccentricity boarded on madness. And there were no boundaries to what he did.”

“What I find fascinating is this strange and eccentric character lived here in Newport.”

Evan eventually succumbed to pancreatic cancer in 1949 and died aged 55. This peer, who is dogged with contradiction and eccentricity, certainly led anything but a dull life.