References to A.C. in music

Most of John Zorn's work, bar the Masada recordings and the like are all Thelemic inspired or themed.

Fill your heart with love today
Don't play the game of time
Things that happened in the past
Only happened in your Mind
Only in your Mind-Forget your Mind
And you'll be free-yea'
The writing's on the wall
Free-yea'. And you can know it all
If you choose. Just remember
Lovers never lose
'Cause they are Free of thoughts unpure [sic]
And of thoughts unkind
Gentleness clears the soul
Love cleans the mind
And makes it Free.

David Bowie covered a song on his Hunky Dory album called Fill Your Heart. Apparently, the song was inspired by The Book Of The Law.

Re: "Fill Your Heart With Love Today"?

Biff Rose co-wrote that song with Paul Williams... neither of them strike me as Thelemites, but Paul Williams *was* pretty demented in "Phantom Of The Paradise."

Really? No idea. I wasn't there. You'll see lots of references to Thelema on song meaning websites in regards to this song, though.

marc bolan makes several references to PAN,but not any other greek gods.on the inside of the lp a beard of stars is a statue of PAN on both sides.he was good buddies of ringo star,and we know the beatles liked crowley.the early songs and album titles are things like"the seal of seasons",by the light of the magical moon"elemental child",etc.the early albums "my people were fair and had sky in their hair but now they're content to wear stars on their brow"has magical little story at the end read by john peel,never mentioning crowley directly,but im sure he was on a similar current.

"PAN be praised for elvish ability to know about wisdom,and to use it wisely"unicorn,tyrannasaurus rex.

I'd hardly call the era of Current 93 / Tiny Tim "early" c93. Current 93 had been going for 10 years by the time Durtro released a Tiny Tim album and World Serpent was well into the downward spiral of melting down. "Early" Current 93 is more like 1982.

And Paul Williams... that man is a genius - here's proof!

http://www.youtube.com/watch?v=bE2m355-JRo
Paul Williams appears in his "Battle for the Planet of the Apes" costume on "The Tonight Show" in 1973...and sings.

"From the new Album "Musick without Tears" - digipack cd ltd 500

With the distinctive style that has always characterized their sound, The Green Man's compositions are thelemic hymns of magic and ritual, love and despair, with references, among others, to the occult life and works of Aleister Crowley and Kenneth Grant."

I'll second the recommendation for The Green Man's new album, since I mastered it. 🙂 I think there will be a release party in Milan sometime soon. The album's lyrical content mostly deals with situations in ACs life, and I think would definitely appeal to readers of this site!

I enjoyed their rendition of the song from The Wicker Man...

Here is a good web-article by Nick Kushner about the many references to Aleister Crowley in the art of Marilyn Manson.
Marilyn Manson was the first person to introduce me to the occult in general, and especially Aleister Crowley.
http://www.nachtkabarett.com/theOccult/AleisterCrowley

Wow, Thanks for all your suggestions, Iv been on Last Fm/spottify to search for some of the more obscure ones. Iv only just had chance to read though it and its taken me most of the evening/morning because Iv been away for a while.  This site is a bit like a old friend.

l will build up DJ sets from this post. Mainly the  industrial influenced music because l usually get invited to play/DJ those sorts of events.

**Intrigued by the direction this post takes** Speaking of music, I was also interested in the fact that in a picture I have of  Jhonn Balance of COIL, he is making the same hand gesture.  It could be he's just recreating the picture but I have a feeling that he'd take it serious enough to know what he's doing and Frankly, i'd feel that Crowley wouldn't just make such a pose just because he's feeling it be great throw-up sign for the picture. That's why I figured to create this topic as I was hoping someone out there knew the significance.

guess I'll take it that nobody will ever know....thanks for at least trying guys.

Now by all means I hope this thread keeps going on to wherever it might lead..

I believe he is referring to this thread, where perhaps he intended to post this?

Despite being a fan of Half Man Half Biscuit for many a year, I only noticed yesterday the following lines from their Get Kramer song

We’ve got Kramer coming over
To produce us
So that we can show off to our specialist friends
Go down to the Falcon in Camden and say
“I’ll have a pint for myself and a pint for the ex-MC5″
Aleister Crowley knew my father, or rather
Business once took Dad up into the glens
Where in a small hotel bar Crowley asked
“Have you got change for the fruit machine chief, I’m all out?” 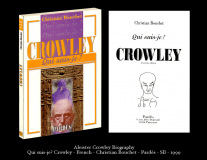