Is the Sidereal Zodiac, compatible with 'Thelemic time' or 'Thelemic calendar'?

This might be of interest to you mal: http://www.solunars.com/viewtopic.php?t=542 --- SIDEREAL ASTROLOGY BOOK - Visions & Voices, by Jim Eshelman.

Thanks, wrwb. Those are helpful.

I agree that the dating need not be considered astrologically. It's the astronomical that is important. Which, if written with consideration of its implications, aligns the mind with Earthly season, relative position of the individual to the moon, sun, stars, galactic coordinates, in relation to the moment in time in the scope of the past and future of Man.
That's not something for everyday timekeeping. Any fixed astronomical alignment recorded yearly, like the equinox, would show precession if recorded to degree and minute. Not a terrible burden but also not necessary for most.

The following is an example of one form of sidereal notation that seems to have potential. It's a development from my previous post and conveys an astronomical interpretation of the Equinox of the Gods in relation to " the fall of the Great Equinox".

It's based on the idea of creating a dodecatemoria. That's 144 divisions of 2.5 degrees on the ecliptic.
The image below is a hypothetical example of how those divisions could appear as small constellations. 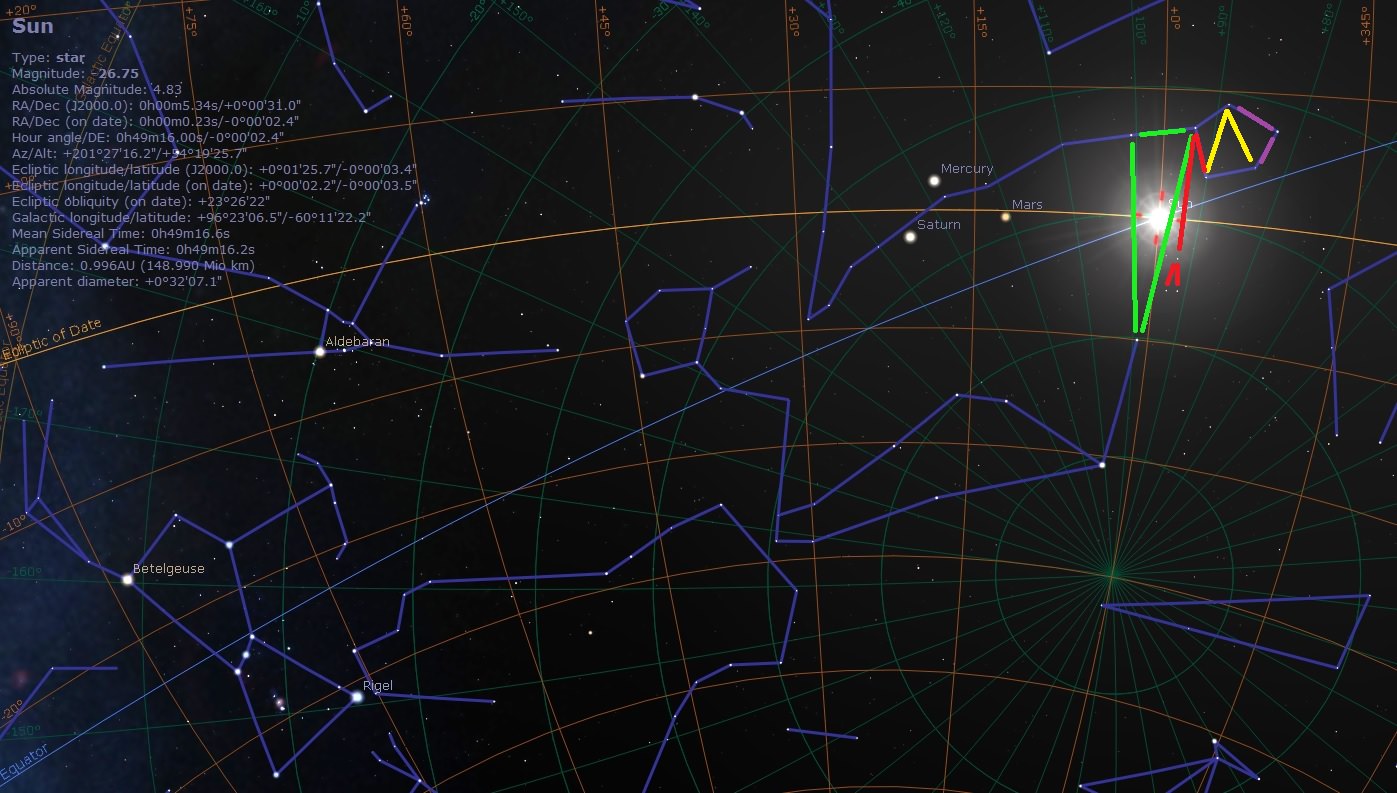 Those 4 comprise 10 degrees and about 722 years of solar precession from the EotG.
They are more directly shown in this picture below with corresponding 2.5 degree segments(which borrowing from the astronomical I'm calling epochs for the time being) on the ecliptic. 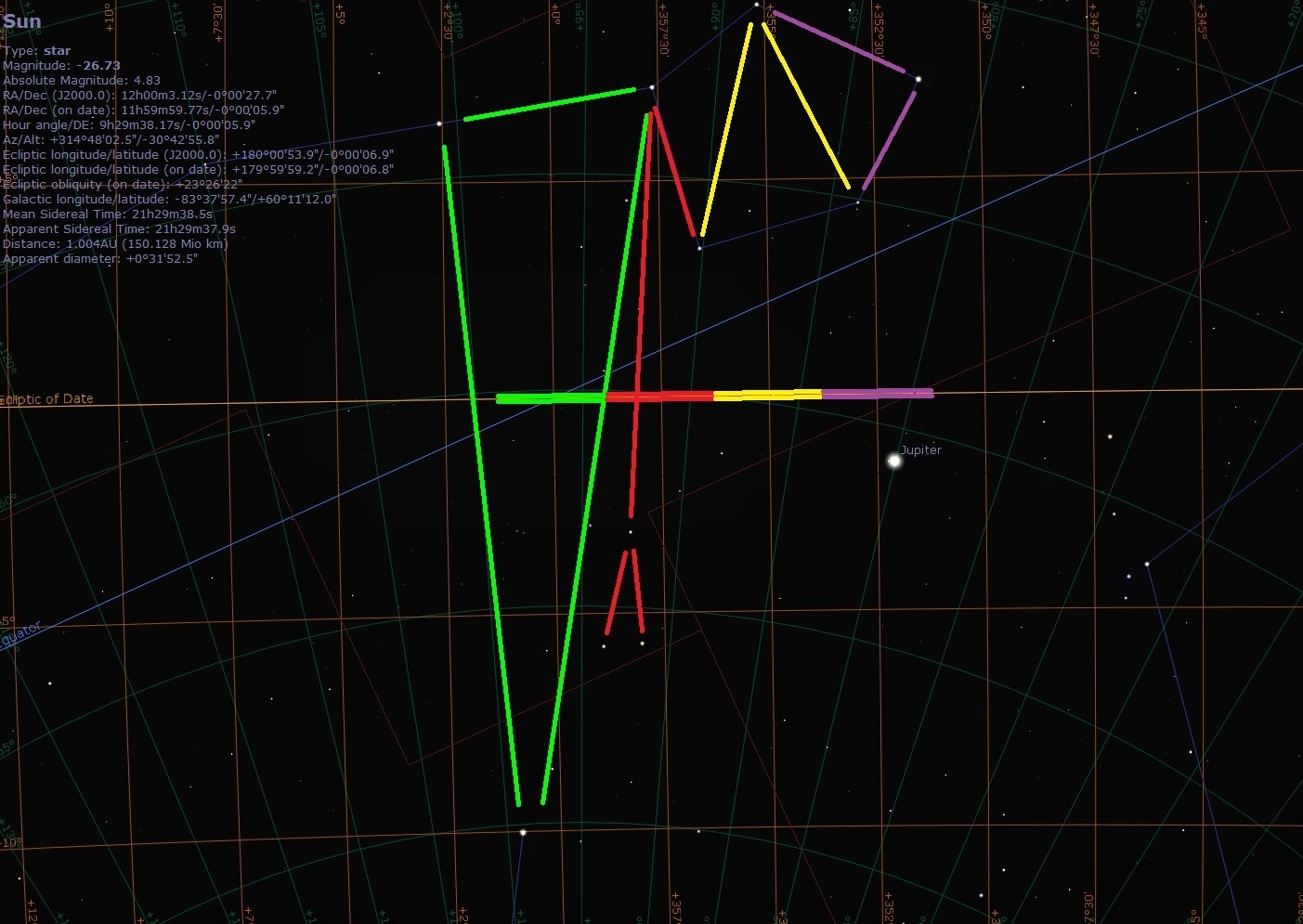 The large green triangle(meant to make an outline of RHK enthroned facing the precession) marks the first epoch and official begins with the V.Equinox 1904. Its midpoint is the v.equinox 1998 when the ecliptic 0 longitude aligned most closely with the South Galactic Pole.
Each epoch is divided into two. An ascension when entered and zenith at midpoint. These can be added to the epoch designation if it is included in the notation

For example, this years v.equinox could be written 1z Viv Su5Pis53 Mo14Ari. 1z for the first epoch at(or after) the zenith.
While an entry for the equinox in 2092 would be 2a VIIIxii Su4Pis48 Mo11Can.
Documenting the precession is noticeable in short terms.
There's a lot of ways to go about making a sidereal notation. This isn't the only one. Apps make it easy to get the information and help in understanding it.

How this relates to the an interpretation of "the fall of the Great Equinox":
If an ecliptic dodecatemoria of constellations is formed above and along the projection of Earth's equator taken from the midpoint of the first epoch they would form an arc over the galactic core. The core is near where the Moon is conveniently located in this picture from the v.equinox 1998. 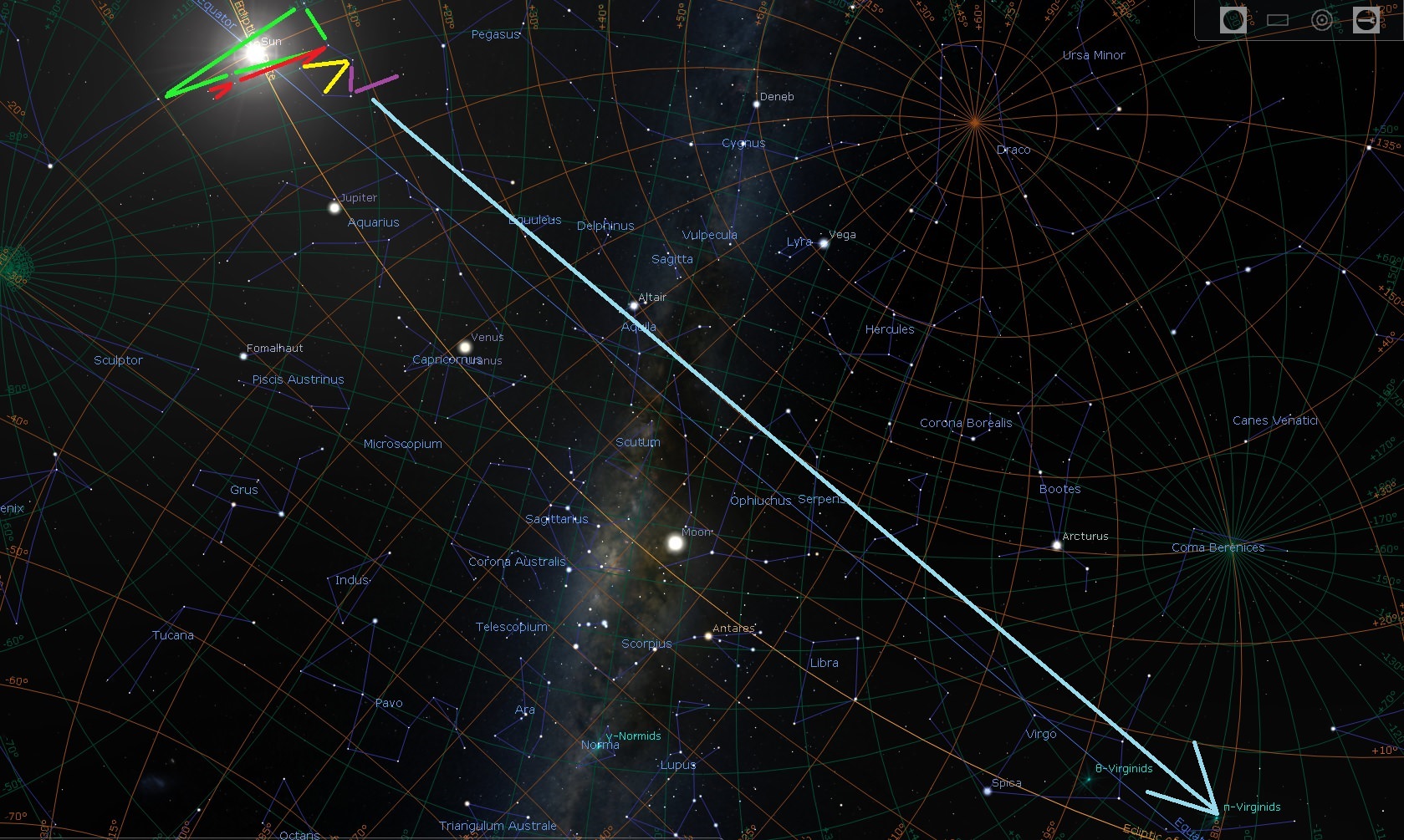 If the calendar is still being used at the equinox 6312 years from now, in 37z III VII vi Su5Sag(8330 ev.), when the precession makes an equinoctial alignment with the galactic core, the dodecatemoria could "fall" and be replaced with a projection related to this Great Equinox.

A fanciful thought but one that seemed worth sharing.

The link related to the Sidereal Astrology Book is helpful too, wrwb. If I do go about mapping this dodecatemoria some of those practices would be necessary. Ugh, I'm getting the impression this could turn into a 7th degree project.

Disclaimer: I confess I am of no account. Perhaps our interaction may fleetingly amuse you.

It both makes perfect sense and pains me that the Thelemic date is based in the solar equinox and not the actual position of the Sun against the starry sky.

As a result, I simply find the Thelemic dating system an anachronism, except for the correlation with the tarot keys. That part is very interesting and yields some interesting synchronicities.

However, I simply refuse to say “Sol in Aries” when it is an absolute fiction.

I do. When I found out about The Precession [sic?] of the Equinoxes, almost sixty years ago,and realized that modern, popular astrology was akilter from the actual starfield scenario, I lost a lot of "faith."

I don't see any problem with Thelema genitorization on the Spring Equinox of 1904 e.v., A.D., C.E. The Equinoxes and Solstices are always close enough for government and back alley paperwork, when considered in the light of Ra being equidistant between the poles.

But your point is well-taken if we decide to include what constellation is really behind the Sun at the time of that bi-annual alighnment.

However, people do bear the emblems and behavior patterns associated with popular Sun Signs and Ascendants. Perhaps it's a quadrant (a twelfth-rant) or a sector of space that ccounts for this.

In Feng Shui, the primary location (one's castle) demands a mountain to the rear (in the north), two lesser hills on the sides (east & west), and an open (valley or pasture) space to the front (in the south). But modern Feng Shui takes this arrangement and disregards the compass heading.

One's "sooth" is the direction one's front door opens toward.

Both systems/approaches work. They are like the Constellations versus Simple-Sun applications to Equinoxes, Solstices, and Birthdays everywhere.

I was once a proficient astrologer. It was my first "occult" undertaking. Today I pay attention (sometimes) to Equinoxes, Solstices, Full moons, and Void-of-course sprees. The rest can be interesting. We tend to cast one chart every 6 moons or so, and then it's set aside (forgotten).

I’ll probably use the dating system because I love the concept, but I’ll make a note:

That kind of thing.