The meaning of ZOS

I finally figured out the meaning of the word ZOS.

It will represent an inverted form of the letter "Omega" with an "O" inside it. "O" could be regarded a symbol for "zero" or beginning/Alpha.

So it should had been a sigil devised by Spare to represent his personal motto to connect his "I" with "Alpha and Omega": "I am Alpha et Omega"...

I've not read deeply into Spare's work, so this is probably bullshit. I always assumed ZOS to be a mutation of his initials - AOS. Perhaps the 'reflex' of his 'mundane' name, magically signifying _his_own_ body.

I always assumed Kia to be the Egyptian 'ka' (vital-force), with the addition of the ego, or 'I'. Obviously AOS loved wordplay - his sigils being the most obvious facet of this. Another example might be the use of backward names in his 'Grimoire' - e.g. Rechtaw.

For those interested, I have been invited by Treadwells to present a illustrated lecture on Spare's metaphysics in London in early November, based on my (slowly maturing) book 'The Cult of One.' The 'Zos' subject will be covered, but also deeper aspects of his ontology. It will probably last 90mins or so... if you are interested, contact Christina.

My understanding of the word Zos is that of, in Spares words, "the body cosidered as a whole".
So by calling himself Zos, Spare express's part of his philosophy. That is, that the body "recieves" and is the means of expression and experience of the "divine". The "body" (not just including the flesh, and organs, etc.) can be said to be the magic substances necessary to....er, magic. Not disimilar to the nath tantric views it seems to me.
Curious take though Sepand, interesting.
Baxian

Dissecting this words into several parts suggests its heterogenous: Z is the feminine part (like in Tzula=TZVVV), while the as is the maskuline part as in AAAOS. The Z (ida) can represent the feminine part of the chakra system (or the karma wheel in the Spare context), while S reprenting the masculine part (Pingala). The O represent the two parts as a whole, but of course it can also represent the heterogenous self also, remembering a sentence in Focus of life= " Prepare to meet God, the omnifarious believing, - thyself the living truth. The chakrasystem (microcosmos) is as we know a reflection of the macro cosmos.

Another interesting aspect of it is looking at ZoS as the thoughtbody. The O can in ZoS be represented by two hands joined together, as the representation of a hand geometrically is triangular (refering to the thumb posture: three eyes). Seen in the illustration Thoughtbody and its sigil. The thought body seen in our context is actually kundalini energy.

There is a certain analogy between thought prosesses (materialistic) in the brain and kundalini energy in the body :=)))

Whats interesting regarding the "Thought-body and its sigil" illustration in The Book of pleasure is the possibility of allegorical interpretation.
I think it is written in a way inspired by the Book of wisdom or folly, because in the Kia chapter it states that the book can be regarded as the book of lies.
If the double hand mudra/thoughtbody (a book where finger mudras is the subject, I found that this mudra actually signifies wisdom) is kundalini energy, is the two fingered mudra the sigil then? Surely it guides and unites energy

Michael Staley
(@michael-staley)
MANIO - it's all in the egg
Joined: 17 years ago
Posts: 4132
31/10/2010 10:44 pm
"Karlir_Johanarnt" wrote:
Whats interesting regarding the "Thought-body and its sigil" illustration in The Book of pleasure is the possibility of allegorical interpretation. I think it is written in a way inspired by the Book of wisdom or folly, because in the Kia chapter it states that the book can be regarded as the book of lies.

I doubt that the Book of Wisdom or Folly was an inspiration, since Crowley most probably wrote it in 1917/1918, several years after The Book of Pleasure was published in 1913. I also doubt that there was a connection with Crowley's The Book of Lies, also published in 1913. The reference to a book of lies is more likely in my view to follow simply from the sentiment that like the Tao, the Kia which can be articulated is not the Kia, and thus everything which can be articulated about it is necessarily a lie.

For those interested, I have been invited by Treadwells to present a illustrated lecture on Spare's metaphysics in London in early November, based on my (slowly maturing) book 'The Cult of One.'

Robert,
Has this one matured yet or does it still wax?

I’m not familiar with Spare, or his work. So, my apologies for butting in.
As has been pointed out, the “Z” can be viewed as a reversed “S” (or was that S as a Z: SS, ZZ.) “ZoS” can be seen as short-hand, an alphabetic glyph, for the winged/solar disc of Egyptian fame. Or serpents guarding the egg, if you like.
I believe ZoS, used as such, made appearances in some alchemical & new age books (mid 1800’s to early 1900’s.) It wouldn’t surprise me if it appears in “Morals and Dogma” by Albert Pike.
One could view ZoS as a Greek interpretation of Egyptian wisdom, I suppose. You have a picture (don’t limit yourself to a linear approach, keep in mind that ZoS is short-hand) and a word/formula. I have no idea if Spare was aware of this or if it was his intent. But he uses KIA too, which is suspiciously similar to another formula. You would have to work ZoS to get to *K*IA. At which point Greek gematria gives up the ghost (revealing itself as a finite system; educational & revealing, but not the magnum opus.)
The ZoS formula is found in Liber aL, for those interested.

I too am not familiar with AOS' work, though I read a lot about him when reading Kenneth Grant's work. I just wanted to point out that when I read this I was surprised when I didn't find anyone to point out the fact that the "Z" of ZOS is akin to a sword, being rigid and straight, and the "S" is like a serpent.
This obviously fits the Tree of Life legend of the Lightning strike/Sword of God striking down through to the Earth, then the Snake arising and slithering back up..
As for the "O", that could be anything from the Universe, the Earth, the Mind, the interface between Self and not Self.

From what I have seen Spare never struck me as a qabalist so maybe someone else can elucidate now that I have brought it up.

Z has been used to denote a lightning bolt and also to denote a double S. In Hebrew, “Z” is associated with swords.
I wanted to upload an image of ZoS, when I originally posted, to give people an idea of an alphabetic glyph. I popped in an archive cd of mine, but I only found my zYs one (not for public domain, sorry.) I did a ZoS one before I ever laid hands on a computer. If I did a digital version, I‘m not able to find it.

Anyways……the point being is that Spare wouldn’t have had to been involved in kabalah. A reflection upon the alphabet, the symbols used & their association with one another (visually, that is), and word-play would have sufficed; the rest would have been “deduced” from further reflection/meditation/ritual. Would Spare, Crowley, or Grant have seen ZoS as a formula? Certainly not in the same light as myself. Though, if you are fashioning glyphs from words (which I was hoping to find an example to share), you could interpret the sigil as a formula: a word, which is an image, and also depicts an act (I‘m not familiar with the “Alphabet of Desire“ but isn‘t that based upon the same concept?)
I recall when a friend of mine looked at one of my sigils and thought it was something sexual, but it was actually crafted from numbers & geometry; a mathematical formula. But, with that perspective, clearly one could interpret the sigil as a ritual/formula for higher consciousness by performing the act. Is that the secret behind Spare’s ZoS? I have no idea…I don’t even care.

I will say that Spare is dead-on alluding to the subconscious being the source of “magick.” It operates on some sort of language which we don’t speak; figuring out that language is the key. And, it would seem Spare gave it a go. 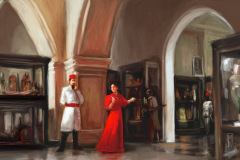