It seems that things are moving again at

Im sure this film will be lots of fun! This is good news!

.... I also wonder why it has taken such a long time to make a film about the escapades of The Great Beast? (there must be some conspiracy high up keeping the 'light' of wisdom and power away from the masses of profanity) Also, the fact that they did not use Mr. John Symonds or Kenneth Grant for any angles on this film is beyond me??? Why Lon Milo Duquette? He never knew the man in person...which means, another film must be made after this one, like they did with Capote.

Personally, I feel both excited by this film, but also I see it coming from a one dimensional source, and will probably end up being a 'projection' of Lon Milo Duqutte's 'ego' upon the character played upon the film (like his tarot cards of ceremonial magick, which have pictures of him upon every card)....living this alter ego on the screen. Looks like it is Lon Milo Duquette's day! Good luck to the man! I am very sure he deserves it...even though I personally dont find any of his material magickally inspiring. Oh Well! Ill still raise my glass to the man for his endeavours...

It seems that things are moving again at

Maybe I'm missing something, but... the last press release I see related to the movie is dated 7/04... is there something new on the website I am missing?

I agree that a biopic of Crowley is looong overdue, but so far they have all seemed to languish for lack of fundage. Where is the "rich man from the West" (that's gotta be California) who will put this thing over the top? We need a Spielberg or better yet an Oliver Stone to do the job right. Certainly there is a lovely incarnation of Babalon out there who can use gentle persuasion (and maybe some light b&d) to persuade said rich man to forge celluloid from his gold???

What's with all the hostility towards Lon Milo DuQuette? I'm personally very exited about this film and glad to hear that DuQuette was "instantly and unanimously" selected for screenwriter. Being very new to the works of A.C., Thelema & Magick myself, I consider DuQuette's books (especially "The Magick of Aleister Crowley" and "My Life With the Spirits") to be the best introduction to Occultism - while still retaining a significant amount of cryptic prose & that humorous-wit which you get while reading Crowley's own books. I'm sure that there are quite a few people, especially people on this site who think that DuQuette's books are a bit of an embarrassment and/or they're too watered down when compared to Crowley or his close contemporaries, but being in my 20's and just recently finding out who Crowley is/was - well, lets just say that there are many people who have been studying Magick, Crowley, Thelema, Qabalah etc. for as long as I've been alive. So for those people, I'm sure that DuQuette may not have a lot to interest them in since they're already at his level. Even though he didn't know Crowley personally, there isn't much argument that DuQuette isn't just as knowledgeable if not more so than the people you mention, such as Symonds & Grant. But I do see your point about it coming from a "one dimensional source". Maybe they'll bring in more authorites on Crowley in the future to help out along side DuQuette - the more, the better!

I started out reading Crowley's novels: Diary of a Drug Fiend & Moonchild - probably the two best novels I've ever read (of course I don't read many novels), but they are so much more than novels to me. I could relate myself to the characters and some of the situations, especially in DOADF but Moonchild just blew me away - loved the ending, which really hit a spot with me and got me thinking about my life. That's originally what turned me on to seeking further knowledge into the life of Crowley and Thelema in general. Problem was, when I started buying books such as Magick Liber ABA Book 4, Magick Without Tears, The Holy Books of Thelema (including The Book of the Law), 777 And Other Qabalistic Writings of Aleister Crowley and many others, well they didn't make a whole lot of sense to me and I was starting to get very frustrated. That's when I found Lon Milo DuQuette's books! After studying his books first, they really did their job, serving as an intro to Crowley's books, and I still read and refrence DuQuette's books almost daily. As for reading Kenneth Grants "Typhonian Trilogies", well I feel they're still a bit over my head for now, since his work isn't really friendly to the newcomer and I know plenty of experienced Crowley readers who still scratch their heads after putting down some of Grants books - well, I don't know if he'd be the best man for the job, in place of DuQuette for screenwriter that is.

What I'm wondering now, since I'm just seeing this website for the first time - Aleister Crowley: Revolt of the Magicians. Well, I wonder what's going to happen to the other film in progress about Crowley's life? Check out the link below:

Perdurabo with Dr. Richard Kaczynski and Lon Milo DuQuette both signed on as consultants (I believe), I'm wondering if this film is going to basically get replaced by this new one that we're talking about?

"Cronus" wrote:
What's with all the hostility towards Lon Milo DuQuette?

Trust me, there is no hostility, just my personal inference upon the quality of his works. They just dont ring for me that all 😉

Like yourself, 'Moonchild' is one of my favourites too...otherwise referred to as the 'The Butterfly Net'. This story has always fascinated me, I have read it many times. Firstly because it was numbered, Liber 81, which associates this work as a magickal (Sabbatic/Witchcraft) text, in the sense that it indicates yesodic/sexual/astral light elements. I have always seen Moonchild as holding the key(s) to the process of manifesting the Magickal Will, or reifying the Word into Flesh. The idea of the butterfly net is also very interesting, as the butterfly is the symbol of the soul and appears on The Fool Atu, Aleph, Frieda Harris Thoth Tarot.

To me, this story holds many secrets of Magickal Practice, it suggests in an oblique fashion the mechanisms for making contact with praeter human intelligences. Also, it explains how these forces are involuted within the astral light, and then later manifested as a Moonchild through the planes... or one can use these forces to 'impregnate' the Magickal Will.

Keep up the Great Work!

Ha! I feel like I should be sitting at the table with both of you and a beer! (or 3!)

I like Lon's work a lot-and I'm pretty "hard core" in my devotion to the Works of Mr. Grant!

Just as Mr. DuQuette is a great "primer" for anyone new to the complexities of Crowley (and I think he has some nice things to offer the ["ahem"] "seasoned practioner,' as well) so do I think that the many forums running on Lashtal offer wonderful resources for exploring points of bafflement with Thelemic Magick and Philosophy. I think people really enjoy being able to share what they know or have experienced and I've found some of the threads here worth printing out and keeping as little "books" unto themselves on particular topics!

To my knowledge, there's no "Primer" material for Kenneth Grant but there seem to be quite a few folks here (including Charles) who can stand in the stead of addressing some of HIS complexities! I'd HIGHLY recommend Mr. Grant's novel AGAINST THE LIGHT as a great point of entry into his works. It's well worth multiple reads and also

I'm hoping the AC film comes together well-there is SO much potential for it to be phenomenal. Crowley is still lurid enough to the general public to attract quite a rush to the theatre after a "sinister" trailer-but perhaps after 2 hours and the price of a ticket, the Law of Thelema might be better understood and considered by a large number of people (if done well!).

I become convinced more and more each day that it's the "antidote" to the catastrophic state the world is in right now.

I become convinced more and more each day that it's the "antidote" to the catastrophic state the world is in right now.

No doubt about it. The Law of Thelema is all about Individual Sovereignty, its acceptance and execution tranforms Slave to King. Imagine what would happen if all the Muslim suicide bombers were suddenly shocked by the 93 Current! They would tell the Imams and such to shove Paradise up their asses! Expand the 93 Current to all who are enslaved by religion, superstition, economics, family, state and addiction-of-choice and you have a REVOLUTION on your hands, boy.

The likelihood of this happening is, unfortunately, slim; another Utopian dream that could only be realized on a small scale, I don't see the entire human race buying into it (innate stupidity and love of the whip, you know. As "Bob" says: "You'll pay to know what you really think!")

To return to my previous question: Could somebody tell me what's new about this movie deal? How is it moving forward? Do we have a shooting schedule yet? Casting calls? I want details! We can debate the merits of DuQuette and/or Grant under another topic (I like both of 'em by the way, but for different reasons).

nick the fan with money in his pocket, just tell me where the theater line starts...

I apologize if I go off-topic but I found a 'Perdurabo' movie trailer on youtube: anybody herein who knows when it'll be out? I'm not able to find much informations about this movie.
Thank you.. 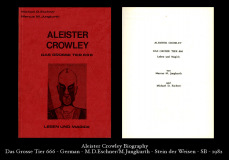