www.forteantimes.com (Back issues are available)

Quote: "Hargrave enacts the statement by occultist Aleister Crowley, utilised in Kibbo Kift rituals: "The word is spoken and concealed: The meaning hidden and revealed!".

The article explores the influence of Thelema, Paganism, Rosicrucianism, Freemasonry, Theosophy, Hermetic Order of the Golden Dawn, and the works of Eliphas Levi and Lewis Spence on the K.K., which was rather like an esoteric alternative to Baden Powell's Christian Scouting movement.

During the 1930's, John Hargrave transformed the K.K. into the Green Shirt Movement for Social Credit/Social Credit Party of Great Britain and Northern Ireland, whose candidate polled 11% of the votes in Leeds South, during the General Election of 1935. (I have an original Green Shirt leaflet in my possession quoting former Thelemite and initiate of the A.'. A.'., Major-General J.F.C. Fuller approvingly, despite the fact that Hargrave was both anti-fascist and anti-communist, and Fuller was a leading official of Sir Oswald Mosley's British Union of Fascists).

Hargrave (known as "White Fox") retired from politics during the 1950's, and became a spiritual healer and inventor.

Dr. Pollen will be giving a talk entitled "Kibbo Kift: Pagan Boy Scouts?" at Treadwell's Bookshop in Bloomsbury, London on Thursday 25th February 2016 e.v. There is also an exhibition at Whitechapel Gallery based on her new book, "Intellectual Barbarians: The Kibbo Kift Kindred".

The Kibbo Kift Foundation holds the archives of the K.K., Greenshirts/S.C.P.G.B.

I can heartily recommend Pollen's book, The Kindred Of The Kibbo Kift: Intellectual Barbarians (at least that's what the title appears to be on my copy, though due to arty design this is perhaps debatable). The chapter on "Spirit" will have much to interest many here.

This very beautiful book is a visual feast, with many many photos from the time, and of the stunning surviving artifacts of these very creative folks. It is well-written, very well-researched, engaging, and fascinating throughout.

A 6 minute film about John Hargrave and the Kibbo Kift:

Many thanks for your posts, @Falcon

There will be a day long-symposium organised by Whitechapel Gallery in London this Saturday 6th February titled "Art, Politics and Magic: The Kibbo Kift Kindred" from 11.30am-6pm:

Thanks Paul for all your efforts getting me back on the Forum with a new password, and I am glad I finally found a way to post this new thread after 2 weeks of trying!

For people who are unable to make the Whitechapel symposium then they may like to know the Sohemian Society will be holding a talk on John Hargrave and the KK on the 10th February.

John Hargrave and the Kindred of the Kibbo Kift
Speaker, Cathy Ross
Our guest speaker Cathy Ross will be discussing with the use of photographs and archive material John Hargrave (1894-1982), and his creations The Kindred of the Kibbo Kift and the Green Shirt Movement for Social Credit. Combining art, politics and design to visually stunning effect, Hargrave and his followers created a maverick but uniquely English form of modernism. Emerging from the turbulence of the twentieth century, this colourful utopian youth movement has strong resonances with the twenty-first-century world.
Cathy Ross is the author Designing Utopia: John Hargrave and Kibbo Kift
Upstairs at the Wheatsheaf Pub, Rathbone Place, W1. February 10th, 7.30
Admission £4

Many thanks indeed for your post. I know the Wheatsheaf Pub very well as Crowley was associated with it for a time, and I have attended meetings of the "retro-dandy gentleman and ladies" New Sheridan Club there.

It appears I may be be travelling a lot to London this month! (I no longer live in the Capital city).

I can promise you If you do decide to attend our meeting you will be made to feel very welcome. We are a very amiable bunch.
Yes we did know about the Crowley connection with the Wheatsheaf. Was it in there he scared the hell out of Dylan Thomas? Or was it another Soho pub? I seem to remember as soon as he saw Crowley enter he ran out of the said pub as fast his little welsh legs could carry him!

I remember there was a comment on the old defunct British Democracy Forum by a UKIP supporter, who said he had read a book about London pubs which mentioned the ones Crowley frequented. I can't remember the title of the book he quoted?

An Anglican Bishop once briefly endorsed the Green Shirts but soon withdrew his backing, accusing John Hargrave of being a "Pagan Sun Worshipper". I have the pamphlet "The Fighting Programme of the Social Credit Party" by Hargrave, and one of the policies is to harness free Solar Power.

A most fascinating talk by Cathy Ross tonight at the Wheatsheaf. She mentioned the Rosicrucian/Theosophist links but when a member of the audience asked whether there were any associations between Hargave and Crowley, she dismissed the notion, although she did say that there was claimed to be an incident where Hargrave confiscated items of Thelemic literature from one of his supporters at a Kibbo Kift camp, and that furthermore it is claimed he regarded old Crow as "decadent". I will be ordering her new book to find out more, as the copy she brought along with her looks fascinating and is profusely illustrated with rare photographs and artwork.

I found last night's Treadwell's lecture by Dr. Annebella Pollen more interesting, which included Crowley's and Thelema's influence on the Kibbo Kift. Hargrave publicly denied any involvement with the Occult (understandable due to the repressive Witchcraft Act which was not repealed until 1951), but in practice he and the K.K. had a secret magickal lodge...

These chaps are keeping the legacy and flame of John Hargrave and the Kindred of the Kibbo Kift alight in the 21st century. Their YouTube channel includes a superb modern day aural interpretation of the Green Shirts "tapping into the strangeness of the land". The recording is highly mystical, trance like and very beautiful.

BBC presenter Andrew Marr has retweeted them recently and it has gone viral since. They appear to be sympathetic to the Green Party of England. 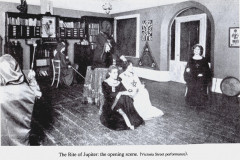