The British Library Has Put Its Extraordinary Collection Of Comics On Display In The UK’s Largest Ever Exhibition....

Scrolling down the page we get:

'The adult theme is evidenced in Aleister Crowley’s manuscript of The Diary of a Drug Fiend.'

With a photograph of Crowley's MS. on display.

Not sure about the context here; I wasn't aware that Diary of a Drug Fiend was considered a Comic Book, but, well.... nice picture, anyhow.

It's a mystery why this is being displayed at a comic exhibition, I'm not even sure it's AC's handwriting!

It's a mystery why this is being displayed at a comic exhibition, I'm not even sure it's AC's handwriting!

It should be Leah Hirsig's handwriting, as she acted as AC's secretary, for Diary of a Drud Fiend:-

"michaelclarke18" wrote:
It should be Leah Hirsig's handwriting, as she acted as AC's secretary, for Diary of a Drud Fiend

Wonderful to see this, though you can really see only the top page of the chapters. But you really get the impression what an enormous piece of work this was, mainly for Leah!

Thanks for letting us know...

This is fantastic - thanks for posting. I wonder how the manuscript ended up at the British Library? I didn't even know it had survived.

According to the British Museum website, the MSS is from the Warburg. Unsurprisingly. Why it appears in a 'comic' exhibition is less clear...

on display until August 19th

Some of the more exciting exhibits include records of the obscenity trial for controversial Seventies comic Oz, and an original tarot card painting from the infamous 19th-century occultist and alleged Satanist Aleister Crowley. Visitors will also be able to encounter the 1825 Glasgow Looking Glass, believed to be the first comic book.

Ah the Warburg - of course. But yes, why in an exhibition of 'Comics'?

From Fortean times for May

"Reflecting the vital role that magic continues to play in the visionary writings of Alan Moore and Grant Morrison, rare artifacts from John Dee and Aleister Crowley are on display alongside the comics they have inspired."

oh? is that in addition to the Diary of a Drug Fiend MSS? And if so, which one? And which artifacts from John Dee?  So many questions, so little time...

oh? is that in addition to the Diary of a Drug Fiend MSS? And if so, which one? And which artifacts from John Dee?  So many questions, so little time...

Shows the painting and one of Dee's books.

thanks jdes - looks like the painting is Atu XXI - The Universe and the Dee books is described as his "Book of Spells"… perhaps a Dee scholar might be able to riddle out a better description.

Nice link from the BBC, thanks jdes.

It's interesting that the Universe card has "XXII" written on it. 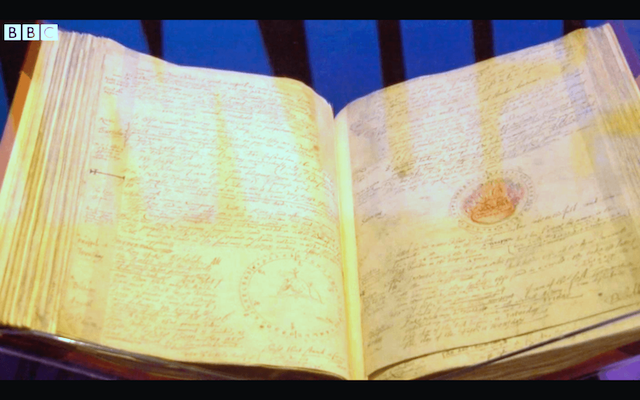 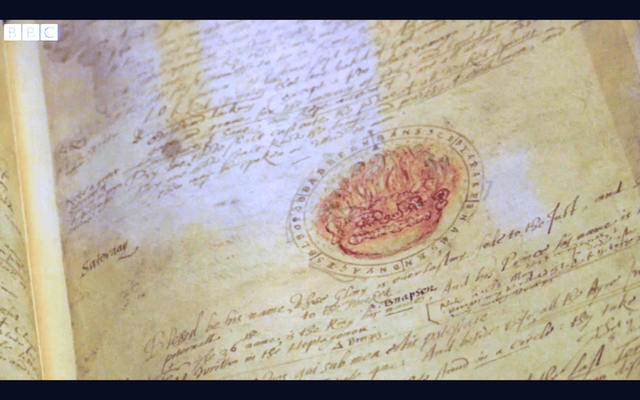 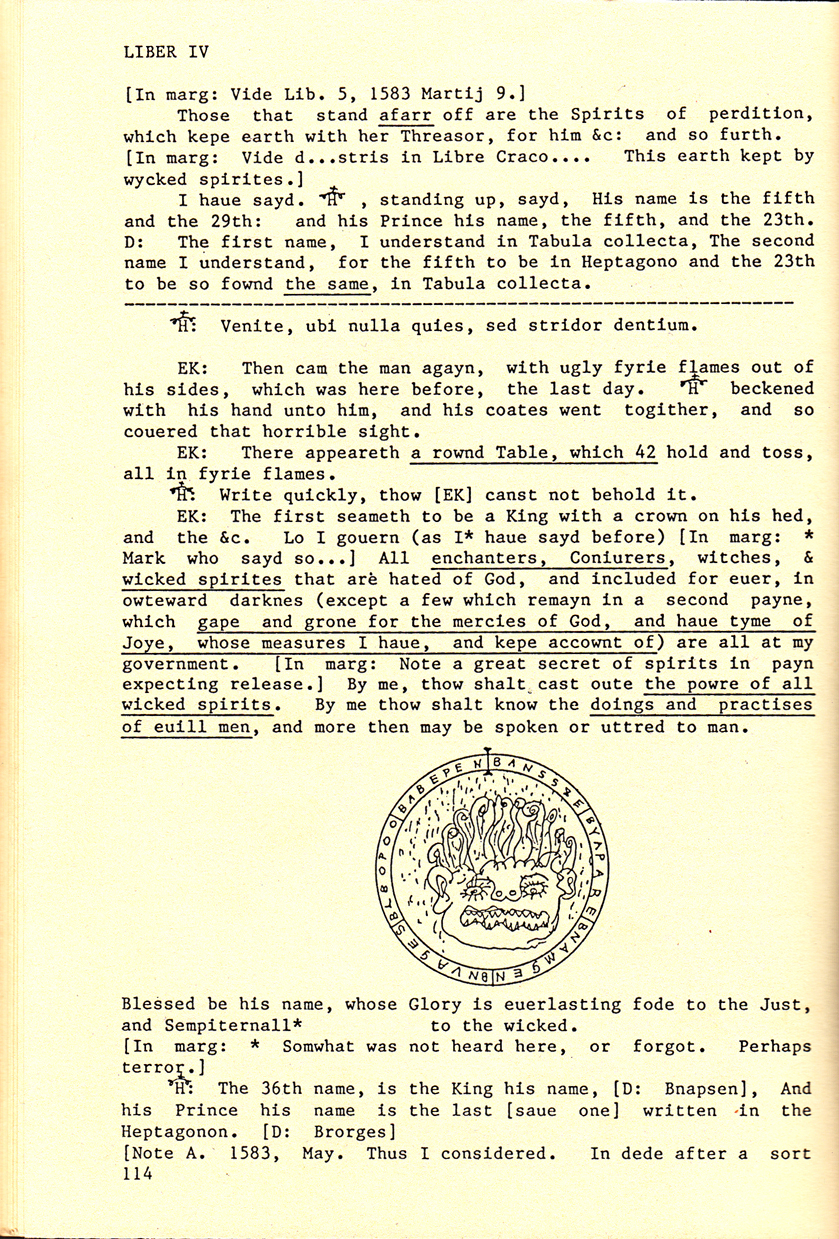 thanks belmurru - you are a gentleman and a scholar.

Is that McLean-Patterson edition available to purchase anywhere? I searched Amazon and saw only a Weiser edition.

Is that McLean-Patterson edition available to purchase anywhere? I searched Amazon and saw only a Weiser edition.

I have to apologize, it's Peterson, not "Patterson" - Joseph Peterson.

Adam McLean's site says there are still copies left for 50 pounds, if you are in Europe (55 outside) -
http://www.alchemywebsite.com/bookshop/mohs20.html

I visited this show today. Well worth a visit for those who live in UK. With regards to the Harris 'Universe' picture, I was surprised by the slightly crude technique...which is missed when the card is reduced so much in scale for the Thoth deck. In symbolic terms though, it is definitely something of a masterpiece.

Also on display at the exhibition - and not mentioned in any of the posts above - is AC's personal book of Golden Dawn initiation rituals.

oh thanks for the tip michaelclark18!  As belmurru noted, curious that The Universe painting is incorrectly numbered, though that might have been corrected during the final inking. Are photos allowed in the exhibition?

>As belmurru noted, curious that The Universe painting is incorrectly numbered, though that might have been corrected during the final inking

Not sure about that one.

For those that would like to know more about the Thoth deck, here are some links to Lon Milo DuQuette's videos going through each of the Major Arcana cards.

Well worth a watch, with many things about the symbolism I did not know before:

thanks!  We're expecting the man himself in Berlin next month to speak on exactly this subject. Perhaps I'll watch the videos to prepare so I can pester him with difficult questions!

Another couple of articles.

belmurru
(@belmurru)
Member
Joined: 14 years ago
Posts: 1063
06/05/2014 9:59 am
"michaelclarke18" wrote:
>As belmurru noted, curious that The Universe painting is incorrectly numbered, though that might have been corrected during the final inking

Not sure about that one. 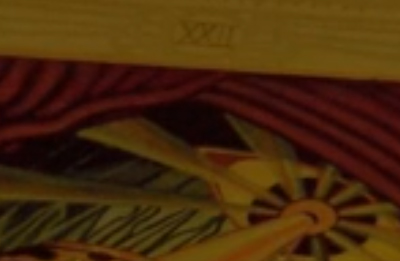 Compare it to the 1969 Weiser cover (or original 1944 plate if you have it), where it looks like the first "I" has been erased - corrected: 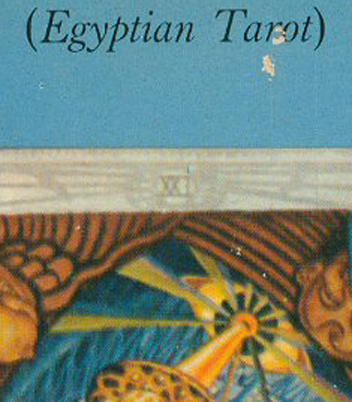 Another interesting bit of bibliographic trivia for those with the earlier printings of The Book of Thoth - circa pre-1981 - is the Aeon card among the plates at the end of the book. The ghostly Harpocrates is missing. In more recent printings of the book, this old painted Aeon card has been replaced by the printed version (look at the typeface), and Harpocrates is present.

Thanks - belmurru. I actually spent more time looking at the surface of the watercolour and didn't really look at the frame.

I guess Frieda Harris counted the fool as a '1' rather than a '0'....that could indicate that this card was completed before any of the others.

Sometimes the fool is placed at 21, or 22( whilst still labeled 0), which could be the case...in this case.

I recently purchased a set of Ithell Colquhoun's Taro cards which also number the first card of the Major Arcana as 1 and the last as 22. The information that accompanied the cards suggested that she used the GD esoteric names for cards and I am wondering if this includes the numbering system also? Might this be where it comes from?

Oskar Schlag also insisted on numbering The Fool as ATU I - and look what happened to him!

What happened to him, WilliamThirteen? I really don't know anyting about him, or what he wrote about Tarot. Everything I can find seems to portray him as living a fairly normal life - for people in our world - and a long one. Except for his exceptional library, his life is a footnote to more famous people - which, if we are lucky, will be exactly the fate of most of the luminaries currently labouring in the field.

At the moment I don't have an explanation for Frieda Harris' numbering that I am satisfied with. I tend to think she was more influenced by her previous exposure to Tarot lore than she lets on - that is, that she was influenced by the same school of thought that informed her painting, Steiner, hence "Continental" Tarot, with Fool as Shin at 0/XXI, and World as XXII (these attributions originated with Levi, were developed by Paul Christian, Stanislaus de Guaita, Oswald Wirth and Gerard Encausse ("Papus"), and the influential school of G. O. Mebes in Russia (published in English by Mouni Sadhu) See here -
http://tarotforum.net/showthread.php?t=167088 - especially post number 16 - for a list of their trumps).

Going by her correspondence with Crowley -
http://hermetic.com/crowley/crowley-harris.html
- she seems to have produced The Universe as one of the first, if not the first, card, which might explain why she numbered it in a system she already knew (see letter for 7 January 1940 and following (search "universe")).

What happened to him, WilliamThirteen?

By the way, belmurru, have you visited the Schlag Library?  It is quite the experience - and you can pick up a set of his Tarot Cards for a reasonable price.

What happened to him, WilliamThirteen?

Ah, I see. Even 1 Fool is too much to suffer in 83 years (let alone any other number). I suppose I could live forever with 0 Fools to suffer in this life.

By the way, belmurru, have you visited the Schlag Library?  It is quite the experience - and you can pick up a set of his Tarot Cards for a reasonable price.

No, I haven't been able to see Zürich yet in my adulthood. Now that I know about it, I'm going to make his library a stop when I get a chance, though.

On the subject of affordable collectible decks, I recommend Figueres (in Catalonia/Spain) for Dali's. When I was last there in 2004 (I know, a decade ago), I picked it up for 25 euros, when it was going for $150 dollars outside of this town. This was in a gift shop across the street from the Dali Museum. If it's an equivalent price next time I'm there, I'm going to buy at least three (one to save, and two for Ebay - with all profit going to LAShTAL, of course!).

Just wanted to note that I went to the Comics Umasked exhibition yesterday at the British Library and throughly enjoyed it so would recommend it to anyone interested in graphic art/illustrated news/politics and the Dee/Crowley items.

On until 19th August