Aleister Crowley, also known as The Beast 666, Perabduro, Ankh-f-n-khonsu, and "the wickedest man in the world", is arguably one of the oddest individuals in human history.

... the oddest individuals in human history.

This is somebody's opinion. I have not decided whether to dispute or encourage it (the opinion).

Having been removed from a school in Worcestershire for being so unpopular with other pupils,

He was expelled twice from public school.  That's interesting so that wasn't for being 'outcast and unfit' but was rather he though the was surrounded by conformist wusses who he tried to 'harden up'?

Lachman writes: "At the public school in Kent, Tonbridge, things were not much better...

"He felt that he possessed a 'natural aristocracy' that made people fear him.

"This only fueled his pursuit of [the unforgivable] sin even more, and he added another notch to his belt when he caught gonorrhoea from a Glasgow prostitute.

"Crowley was fast becoming a... 'rebel without a pause'."

English private schools were notorious for hazing (?) 'bullying' (?)  so I am confused as to how Crowley didn't fit right in.

I am confused as to how Crowley didn't fit right in.

It doesn't matter if we're discussing publick schools, classmates, Plymouth bros, or society at large ... the bottom line seems to be that AC caused trouble wherever he went, and there was nothing into which he could fit ... unless he was in charge and able to adjust it to his own specifications. 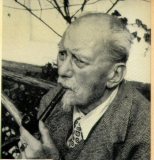