Forums
LAShTAL Forums
Thelemic Culture an...
Crowley Clippings
What is a pseudo-ci...

It's our long-lost old pal Alrah!

Please note that the posts on The Blogs are contributed by third parties. The opinions, facts and any media content in them are presented solely by the authors, and neither The Times of Israel nor its partners assume any responsibility for them

Posted by: @ptoner - quoting some pundit

"Crowley included a riddle in his Book of the Law"

Crowley did not include it. Aiwass included it and Crowley writ it down.

NOBODY knows for sure if gematria is required, because ...

1. It has not been solved, so how can some critikal pundit say gematria is required?

2. Nothing nowhere says gematria is required. Except this poser-poster-person.

3. A pseudo-cipher is "a false code," and whoever wrote the epistle you are quoting needs to go back to Thelemic Kindergarten and get his/her Qabalistic bias straightened out.

"... neither The Times of Israel nor its partners assume any responsibility for them."

Non-assumption of responsibility is the doorway to schizophrenia, which is an unfortunate state of mind.

I remember that, girl?

Such fun times 10 years ago.

I remember that, girl?

For a while, I had email exchanges with her. They were completely rational and she introduced no woo-woo or pseudo-puzzling-codes-or-ciphers. I suspect the pseudo-QBL stuff kicked in when public utterances were uttered. Privately, she seemed normal as could be.

She has been banned here, i think 3 times, but twice for sure.

And also has been banned from heruraha, aka the Fruitcake Factory, of sainted memory.

And also has been banned from reddit/thelema, aka the New Fruitcake Factory.

Which is all the places where Thelema is discussed that a person can be banned from, AFAIK.

The Triple Crown of Thelemic bans, in fact.

I could but wrong but this doesn't sound like the same person who was here in the past claiming to be Ma'at and sharing digital manipulations of the Harris Thoth images....

Pegasus/Meg the tarot manipulator, and methamphetamine fan, who posted here 2-3 years ago, was an Aussie, yes.

Some folks speculated that Peg was the same person who used to post here 10-15 years or so ago as Alrah, and under another name before that. But they were mistaken.

Alrah was/is British, and has for some years now gone under the name Bethsheba Ashe.

She was last banned from here for a post in a thread about trans issues, i assume for some sort of transphobic bigotry.

I could but wrong

And it appears Aiwass...

Some folks speculated that Peg was the same person who used to post here 10-15 years or so ago as Alrah, and under another name before that. But they were mistaken.

I was assuming that-and hence it seemed to me that the Bethsheba bio and writing style was a bit different from the Pegasus posts I recall...

No, she is a Brit. And Bathsheba Ashe is one of her aliases.

claiming to be Ma'at

That was our meth-promoting Aussie gal. She was not Alrah or Bath-sheba or the webmaster of The Babalon Website, all of whom are the same, in jollye olde England. 1. It has not been solved, so how can some critikal pundit say gematria is required?

How do you know it has not been solved? What is lacking in the extant solutions?

How do you know it has not been solved? What is lacking in the extant solutions?

There are folks who claim to have solved it. I think (oh, no) you might be one of them. I do not know it has not been solved, because it is impossible to prove a negative - or so the philosophers say.

Extant: "Standing out or above any surface; protruding."

I have not noticed anything, anywhere that is "standing out," except for the claims of the problem-solvers themselves, which are easy to disregard.

Anytime someone wants to summarize their findings in a single paragraph, not to exceed one page by avoiding paragraph breaks (about 250 words), and said findings have a practical application, I will be the first in line to proclaim their insight as insightful. References and links to multi-paged documents filled with assorted numbers and foreign lingo words will be denied. By me. Not that I am the final Arbiter in such matters.

She left and asked that all of her threads be deleted.

As long as we’re on record..

Yes, this is correct, and i apologize for muddying the record.

remind Shiva of Crowley’s comment on II:76. I think most people assume that ‘the regular pattern’ refers to Standard gematria. Does he have an alternative suggestion?

'This passage . . . appears to be a Qabalistic test (on the regular pattern) of any person who may claim to be the Magickal Heir of the Beast.'

I suggest that discussions of claimed solutions to the AL puzzle be moved elsewhere.

Does he have an alternative suggestion?

I don't know about AC's comment and the "regular pattern," or whatever the term is. I have already made my alternative suggestion, which I will now repeat, in paraphrase, if I can only grasp the essence of the original injunction ...

Forget it! If you have to use your linear mind to crack the code, then it's just made-up stuff. How can it protrude or become extant if it's all made up.

Now, if a solution should arise by gnosis, and it gets refined into practicality by said linear mind, and it can be expressed in the common language, then good for that person and their mind.

I suggest that discussions of claimed solutions to the AL puzzle be moved elsewhere.

A good suggestion. There are many threads devoted to the puzzle, and they can easily be necro-filed.

And it appears Aiwass... 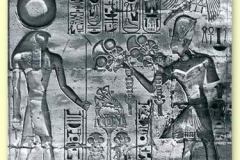