For those interested: The Secret Rituals of the A.'.A.'. - The Secret initiatory rites of George Cecil Jones' & Aleister Crowley's Argentium Astrum, are here for the first time revealed to the public. Now every sincere seeker after the Mysteries of Thelema, may study these important rituals, regardless of affiliation. "Mystery is the enemy of Truth." Now available at Amazon.com

No thanks, I would rather keep it mysterious as part of my gradual and hopeful attainment; something to look forward to etc...

Amazon says it has only 26 pages, and we can only view the front and back covers, and the title page. Not even the table of contents, to get an idea of what our $11 would be buying us.

Please add more details to assure us this is not a scam.

Firstly, I tried a search on Amazon.com (both USA and UK) and got no results with either title or term (bolded above). Maybe somebody (belmurru?) can post the direct link?

Secondly, there are only two rituals, Pyramidos and Tuat, and they've both been available to the "public" for some time via Google and free download. So, we find the "hype" is misleading.

Quadly, the poster is making his/her first post as a offer to spend money ... and that's (sometimes) a "red rag that inflameth Apis the Redeemer."

Firstly, I tried a search on Amazon.com (both USA and UK) and got no results with either title or term (bolded above). Maybe somebody (belmurru?) can post the direct link?

DISCLAIMER - THIS LINK IS FOR EDUCATIONAL PURPOSES ONLY - DO NOT BUY THIS SO-CALLED BOOK: 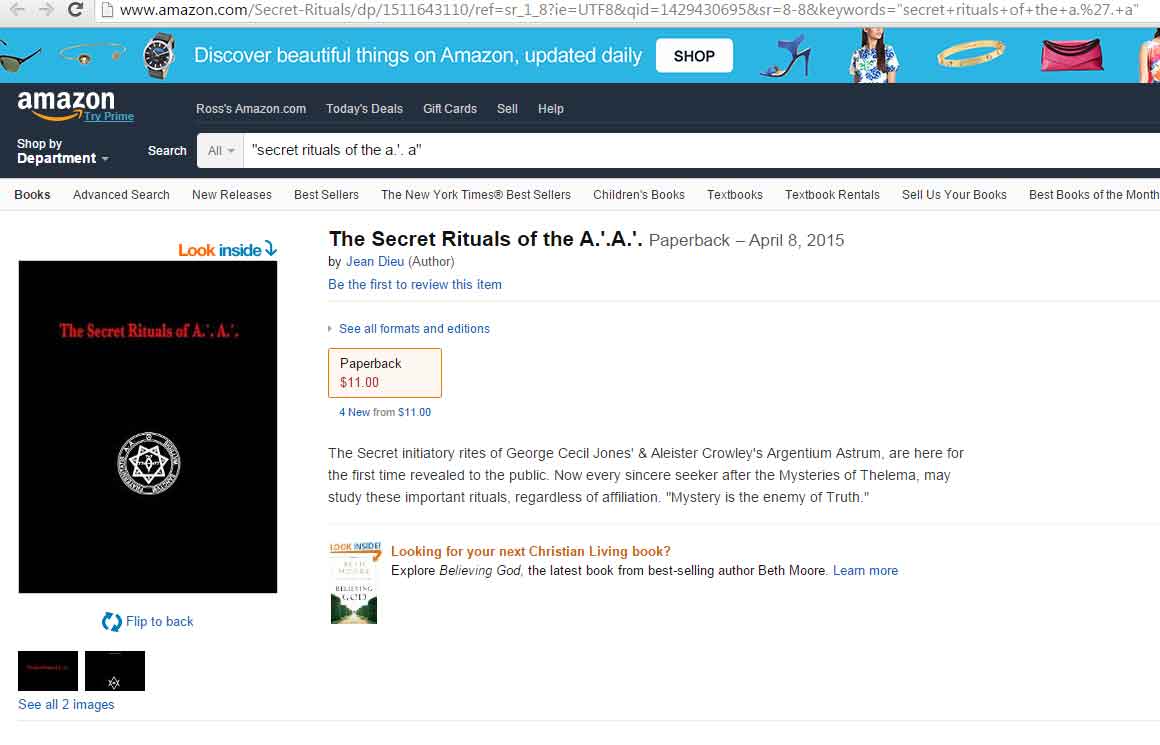 Secondly, there are only two rituals, Pyramidos and Tuat, and they've both been available to the "public" for some time via Google and free download. So, we find the "hype" is misleading.

Indeed. Although he might have included Liber XXVIII, Septem Regum Sanctorum, as well, for another two pages or so.

But, if all it "is" is those three rituals, without commentary or additional material (à la the late David Mattichak's Pyramidos), it is certainly empty hype.

Right. My 7 Kings takes up three pages. 6+10+3=19. Plus a title page and a copyright page, and the mandatory "last page blank" = 22. So there you have it. Eleven pieces of paper = $1.00 per piece of paper, or $0.50 per page (not counting the cover). So for those who worship hand-held books, it's a bargain; although one can always download, print and bind their own version.

From 1967 to 1969, or so, I had access to a copy of Pyramidos and 7 Kings, but not Tuat. Then fate (destiny, karma, the black lodge, space aliens, etc) intervened and I lost contact with written docs. In 1986, I actually paid 6 or 7 dollars for a (photo)copy of Pyramidos, but Tuat and 7 Kings were nowhere to be found.

When it came time for Star System to actually initiate some folks, in 1989, Pyramidos was thus available and easily adapted. By 1990, a need for Tuat arose, but there were still no sources, so I created one based on the ancient journey down the Tuat River as recorded in various versions of The Egyptian "Book" (papyrus) of the Dead. It seemed to work just fine.

Many years later, the Crowley version of Tuat finally surfaced on the wild world web. Frankly, I was not impressed. I prefer my version as drawn from the really olde papyrus school.

Then Pyramidos and Tuat were converted into two videos. I mention this because (now that Star System has been closed for a while) I'm considering making them available for download ... for free, of course.

I never used 7 Kings (outside of Solar Lodge, where it was enacted once) and I never converted it to video. After all, 7 Kings is not some exalted gift from the hierarchy ... it's virtually a punishment and an incentive to get moving, applied only to Probationers who are lazy and not doing their work. I figured, if they can't do their work on their own behalf, far be it for me to kick them (ceremonially) in the butt 😀

This "pamphlet" contains no table of contents, just the A.'.A.'. rituals as I received them. It is pure text, no notes or annotations (I removed all hand written notes and stage directions from the rituals, as they were not AC's, and I could not verify their source.) Here is the list of rituals: Liber Causae 0=0 (yes, it is the the probationer initiation), Liber Septem Regum Sanctorum 0=0, Liber Throa 1=10, A.'.A.'. Equinox ritual, and Liber Cadaveris 2=9. I did not include Pyramidos. Again, it is the A.'.A.'. rituals as written down by AC (secret words, passwords etc. vary from lineage to lineage, and are therefore not included) nothing more...

... passwords etc. vary from lineage to lineage, and are therefore not included ...

I did not include Pyramidos.

Oh, well then, what the Hades? Here's a little weekend entertaininment: The Opening to Pyramidos (5 minutes):

Amazons 'Look Inside' is pretty futile.

I've e-mailed Amazon about the "Look Inside" issue, don't know if anything will come of it or no.

Having obtained the booklet I can verify that nothing more pretty much sums it up. The texts have been stripped from all "stage directions", signs, symbols, etc. Even the verses have been turned into prose. Think of a Shakespeare play stripped of everything except the actors' words, yet even these presented in prose, and you'll have an accurate image of what awaits the reader here.
In my opinion: don't bother with this; it's simply a waste of time and money, and you can easily find superior versions of the texts on the web.

Aha!  Thanks for spending One Crowley ($11 - plus shipping) in pursuit of genuinity and for posting a review. It seems this is the "bare bones" version.