Beyond the Mauve Zone - now available

The standard edition of Beyond the Mauve Zone was delivered from the printers yesterday afternoon, and needless to say (but I'll say it anyway) is a deilght. It is published today, the 68th anniversary of the incoming of the Aeon of Maat, the inauguration of which was declared by Achad on 2nd April 1948.

Advance orders for the book will be packaged and despatched over the next few days. Further details of the book and how to purchase can be found on the Starfire Publishing website:

Since the devil finds work for idle hands, work has already started on preparing The Ninth Arch for republication later this year. This will complete the programme of restoring to print all volumes of the Typhonian Trilogies.

I had to go into a rats nest to get it, but it was worth it.

This is the one of the nine that eluded me and so the wait is over. As the first volume of The Equinox has come to be known as "the encyclopedia of initiation" for the previous century, I have no doubts that the Typhonian Trilogies are and will be known as the same for the coming century ahead. It is obvious who passed through the doorway that A.C. opened.

Thank you for the work, Michael, that you have done to keep these books available.

Thank you for your appreciative remarks, obscurus. Beyond the Mauve Zone has sold very well, selling faster than the first edition back in 1999 (well, early 2000). I'm looking forward to republishing The Ninth Arch later this year and thereby reaching the goal I set myself some years back of restoring all volumes of the Trilogies to print. As a matter of fact, Outside the Circles of Time went out of print recently, and that too will be reprinted before the end of the year. The other title which will be brought back into print this year is Against the Light.

I'm hoping that next year will see the publication of a first volume of selected correspondence by Kenneth Grant. He maintained a copious correspondence across several decades, much of it of a substance that many will find inspiring and of great interest.

Also earmarked for next year is a volume collecting together various articles, essays, forewords, introductions etc published by Kenneth across the decades, excepting of course the articles previousy published in At the Feet of the Guru. The collection will include a few unpublished items, such as a foreword for Liber Aleph in the late 1940s. 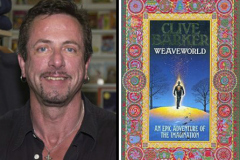