"Do what thou willt shall be the whole of the law."

One thing i have wondered over .
Should the Holy Hexagram be traced "averse"?

Makes me see a correspondance to "Reguli" with its averse Pentagrams (together with the normal Pentagrams of the Star Ruby they yield the Hexagram).

It also makes me think of the red tringle as the Divine part or highest part (the supernals).
If the Hexagram is traced normally, only changing its colours, the holier part of it would not be descending but behaving rather normally save for an Elemental "hue" of an oposite kind.

"In the magical hexagram this is revered; the descending red triangle is that of Horus, a sign specially revealed by him personally, at the Equinox of the Gods. (It is the flame desending upon the altar, and licking up the burnt offering.) The blue triangle represents the aspiration, since blue is the colour of devotion, and the triangle, kinetically considered, is the symbol of directed force."

Then again, the Hexagram and HGA is centered at Tiphareth first and foremost, not the Supernals. I do however feel a bit inclined to believe
that the power of the Ritual is supposed to pass down through Daath.

Another thing, if a Banishing is performed before the Star Saphire, using only Earth Hexagrams, the Hexagrams superimposed on eachother (the Holy Hexagram "averse") would yield 12 at each point, thus also invoking the Zodiac.

I have heard opinions about the Star Saphire only being an Invoking Ritual, not for Banishing.

If the Star Ruby is only for Banishing and Star Saphire only Invoking, in what sence can they be said to "correspond" (exept for mathematically)?

"The Star Sapphire corresponds with the Star-Ruby of Chapter 25; 36 being the square of 6, as 25 is of 5. This chapter gives the real and perfect Ritual of the Hexagram."

I would say that one Banishing Pentagram Ritual and one Invoking Hexagram Ritual "corresponds" in no way exept for having the same author and being Thelemic (and Hexagram following Pentagram).

If the Star Saphire could also be used for Banishing though it would "correspond" by being the next serial Ritual to perform (i wont argue for the use of some "invoking Star Ruby", if nothing else the results of Star Ruby / Reguli is so much more rewarding).

I would love to hear opinions.

"Love is the law, love under will."

93
Dear Marcel!
Usually such questions have no definite solution but can be elucidated easily through astral workings. That's the clue to all rituals.

It's the 21st century. Does it really matter which of the Triangles in the Holy Hexagram is on top?

The point, or a point, of the unicursal Hexagram is that it can be drawn from the centre - in four different directions. However, while "down and up" have some sense, the notions of deosil and widdershins don't.

Of course, the UH can also be drawn in 3 dimensions, as the centre of a cube then connecting the six corners.

I prefer it so that there's an ascending red triangle with six blue triangles descending from left, right, front, back, above and bottom. Especially from the bottom. 😉

I admit I'm somewhat joking. I admit that it's important to be very disciplined in the rituals, but it's also healthy for one's sanity not to walk too far into the spider web of Khephra in Hod (and no jokes about spiders having only six legs, please). After all, the end of rational thinking = 10 of Swords = Ruin. Also, the Hebrew word for "ruin" is OI = 80 = 8*10 = Mercury multiplied by Malkuth.

Edit: But concerning the invocation and banishing, it's perhaps good to perform a banishing ritual to get rid of mundane thoughts, evil spirits, etc. After your mind is clear and still like the surface of a pond with no wind (banishing), you invoke a positive force on that space cleared by your banishing.

Concerning Crowley's note about Star Sapphire corresponding with Star Ruby, I think that it is just a note concerning the fact that in Book of Lies Star Ruby=25=5*5=5 whereas Star Sapphire=36=6*6=6. That is, they are different numbers, but they correspond by the pattern they're printed with in the Book of Lies.

I guees it depends on symbology.
It COULD for instance (on a sub concious level) be interpreted as Invoking the Qlipphoth if done averse.

The thing with Hexagrams though, they are bi directional by nature as opose to the Pentagram. 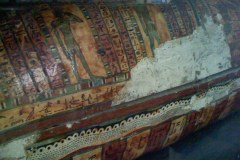