Raphael and the Golden Dawn

Aaron Leitch (talented author and researcher) posted a new article in his blog regarding the Secret Chiefs of the G.'.D.'.
Leitch postulates that the head of the order was Archangel Raphael himself. Interesting read.

This causes me to ponder how the Chiefs manifested to AC when he claims they transfered authority to him from Mathers. Would this intelligence which manifested as Raphael to the men and women of SRIA and the G.'.D.'. recast itself as Aiwass or perhaps was there a shift in spiritual authority on the higher planes. An astral corporate coup, as it were...

I recommend Leitch's book "Secrets of the Magickal Grimoires: The Classical Texts of Magick Deciphered." Its quite good despite the gaudy packaging.

"einDoppelganger" wrote:
perhaps was there a shift in spiritual authority on the higher planes. An astral corporate coup, as it were...

would be more likely.  Aiwass is the bringer of a new aeon rather than, say an elaboration or expansion on an old aeon.

Unless you give validity to a John Keel model in which its all one intelligence tinkering with the evolution and belief systems of humanity since time immemorial. Its also entirely possible that such an  "intelligence" would be colored by the glass of Crowley's persona resulting in a young, angry, call to revolution / aeonic shift. The Raphael of the SRIA and G.'.D.'. would be colored by a less aggressive and revolutionary zeitgeist.

Consider a Thelemic  pentagram ritual compared to a G.'.D.'. one. The calls are to (naturally) to Thelemic intelligences or ideas (Aiwass, Babalon, Nuit etc).
When working from a larger gestalt of interplay between consciousness and agents of change (Raphael / Aiwass / LAM / Moroni) consider a possible interchangeability between Aiwass and Raphael as well as  Legba, Lucifer, or Scirlin if one happens to work a grimoire based or new world tradition. Not to say one should transpose these entities into a LBRP - rather just that the "transmission" comes from a source that wears a mask to fit the expectations and cultural preferences of the recipient.

On page 350, Nick Farrell’s King Over Water states, “Mathers 5=6 scrying revealed that the Golden Dawn had a triple aspect genius, or Angel, which oversaw its work. When the Angel was teaching it was called Heru. When it was running the order it was called Hua. It also had a secret name which reflected its connection to the Third Order. This was never revealed, but it was probably Raphael.” Raphael is discussed futher in his book.

Archon Basileus is the title that was bestowed upon Mathers as head of the Alpha Omega. It is the equivalent of OHO ofthe OTO.

Here is a link for an interview with the author about King Over Water.
http://magicoftheordinary.wordpress.com/2012/03/22/interview-with-nick-farrell/

Rosicrucian Tradition of the Golden Dawn by Samuel Robinson is another interesting Golden Dawn Book. I cannot recommend it due the numerous misspelling, typo errors and grammar mishaps. For example he writes the wrong century the with the 21rst Century instead of the19th century. Deciphering one’s poor grammar is not acceptable. Hopefully a new edition with multiple corrections will be produced. The author belongs to the Hermetic Order of the Nascent Dawn and claims his third order has connection in Germany with the Third Order which has the original source of Golden Dawn Material.

The book has interesting information such as dwelling in the mystery of Golden Dawn angel: HUA and HRU by assigning three Egyptian Godforms for each letter. The explanation of why the pentagrams need to be visualized blue for Chesed to counterbalance red Geburah was informative; I always wonder why Modern Magic by Kraig suggested blue. His analysis of the second order with evocation and alchemy using the Z documents certainly went beyond my level at this point in time for me.

His content on the third order and the cipher manuscript contents surprised me. I always thought Order of the SS which came from a Golden Dawn Manuscript stood for Silver Star since reading Crowley’ One Star in Sight. Instead I find out it stands for Order of the Secreto Secretorum.

The Babe of the Abyss is a Golden Dawn degree used by Felkin’s order according to Robinson proving Crowely did not create this degree. There are three neophyte grades in the Golden Dawn for each order, the neophyte 0=0 for the first order, the portal for the second order and babe of the abyss for the third order. Samuel Robinson certainly is carrying the tradition of the Golden Dawn. 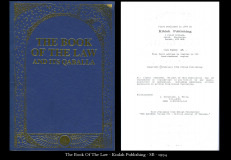