This episode features an interview with playwright John Burns. John’s latest work, Aleister Crowley: A Passion for Evil, is being performed at the Edinburgh Fringe Festival this summer.

We discuss little known aspects of Crowley’s life, including his childhood and his experiences as a mountaineer. We also discuss the recent Disinformation documentary Aleister Crowley: In Search of the Great Beast 666, which attempts to dramatize Crowley’s history through filmmaking.

Even has a mention of LAShTAL near the end.

Thanks for the link.

"Adeptus Major of the Third Order" - is that a direct quote? If not, considering that Mr. Burns' background is not in Occultism, it might help keep him from making "enemies of the occult community" by perhaps sticking with direct quotes from Crowley where occultism is concerned, and just trying his best to get those quotes into the proper context.

The podcast was nice overall, taken for what it is. I think that Mr. Burns is right to focus on the mountaineering and poetry of Crowley.

I do not think that Crowley used his spiritual studies as a way to deal with the death of his father explicitly, nor do I think he was "pissed off at Christ for letting his father die" or any of that. Perhaps at first, but not as he grew.

I think that if he were alive, he would be absolutely pissed off at the way some people in this world have treated his work and his legacy. Once he took care of that business, he might admit to being amused by the whole charade.

I think if he were in that train with Rose again he would absolutely return to Cairo and receive the Book of the Law a second time.

Thanks for the link, Paul.

An interesting podcast. John Burns gives a creditable account of AC and himself, refreshingly free from the usual trappings. His remarks about LAShTAL.COM are perceptive. 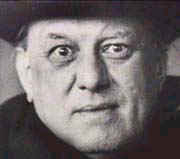