Lead singer Genesis P. Orridge expressed his admiration for To Mega Therion and Anton Szandor LaVey, for which he was sometimes criticized in the media and by intolerant Xists.

We had quite a lot of discussion of Genesis P.  and Psychick TV when he died a last year.

You know that tale Orridge spun about two elderly ladies approaching our control-freak when he was  but a child and randomly telling him that he would one day be important for magick?   I'm beginning to think it was baloney.

I'm beginning to think it was baloney.

I never heard that one. He doesn't mention this in his works (that I have read)(or can remember), so where did GenP get this tale?  Potential Baloney, possibly Shinola grade, pending evidence from anyone who knows this legendary rumor to be true.

I never heard that one.

Nor have I-but it's not terribly momentous. A couple grannies (presumably witches) saw something special in Little Neil. They weren't exactly wrong, were they? Neil became Genesis, achieved notoriety and has even been written about and spotlighted by the New York Times. He certainly broke ground post-Crowley with a lot of his experiments.

where did GenP get this tale?

I think he would have gotten it from the Grannies. 🙂 As to the source of his telling it, Dom might recall. An interview, perhaps?

evidence from anyone who knows this legendary rumor to be true

Well, all parties are dead so I don't think we'll get a post from a new Lashtalian:

"Greetings, All. My name is Gertrude and I was, in fact, one of the women our Neil alluded to. It was actually my coven-sister, Mabel, who received a vision upon seeing the lad and thus spoke. These days, I am quite old (149 this year) and I live at Harmony Hills Retirement Home. During one of my toiletings, I noticed my nurse had a Psychick Cross tattooed on her wrist. I didn't say a word but knew Mabel (who passed on on 2014) was right."

He mentioned it in interviews here and there.   I recall that tale was told in a magazine. 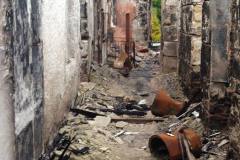