Those members of this site that know me personally will perhaps be unsurprised to read that I am a subscriber to the delightfully eccentric magazine, The Chap - "a journal for the modern gentleman".

The article is well-written, un-sensational and witty. Crowley, of course, receives a mention, as does L Ron Hubbard.

"In 1971, a handful of Chaps and Boffins at the International Astronomical Union clearly saw reason, and named a moon crater after him. That the Parsons crater is on the far side of the moon is suggested by some to indicate that even now, Science casts the renegade rocketeer into shadowy oblivion. But why should the crater point earthward? Parsons never did. As a youth he adopted the motto Ad Astra Per Aspera. His shade surely prefers the Moon's dark side, oriented forever toward the stars."

For more about The Chap, visit http://www.thechap.net

John "dubya" has been featured in a surprising range of gentlemen's magazines.

However I think the most incongruous was perhaps the "Darkside Rocketeer" feature in Make Volume 13, which was followed by instructions on how to make a Swahili bed - "in Kenya, the most common and most useful piece of furniture is the rot and bedbug resistant Swahili bed", then "Quick Bits - tips and tools for digital diversions", then "Make Your Own Sun ... how can we keep the highlights on the rocks and the backlighting on the cactus spines, while eliminating solar effects and restoring the blue sky?"

I say old bean. What a smashing looking periodical. Trust Lashtalians to spread the word.Pip pip!

Thanks for the reccomendation Paul,

Great looking magazine there. I have to say they got me with this bit

I have to doff my cap to them for that show. Well done. 😀

I don't subscribe, but I have some splendid issues of the Chap from some years ago, as well as the very very brilliant Chap Manifesto. There was an article on Crowley too, last year I think. Definitely an allied instrument! There was a hilarious advertisement for La Fee absinthe on the back cover a few years ago, the picture of him in his AA kit doing the Therion sign and stare, with

"I turn men into WEAKLINGS!"
says Aleister "666" Crowley
-"The Wickedest Man in the World"
author of Diary of a Drug Fiend,
White Stains and
Magick and Theory & Practice

"When relaxing in the Abbey of Thelema, I always ensure I have a glass of La Fee Absinthe to hand. An absinthe obsession is a healthy and natural affectation for a chap of standing in polite society, but it is best enjoyed in the company of your own Scarlet Woman"

They have a nice forum too.

It's grand to see so many decent chaps here!

I've got an article in the latest issue on Ye Ancient Order of Froth Blowers, and in the next issue one entitled "Aleister Crowley - Gentleman Mountaineer". 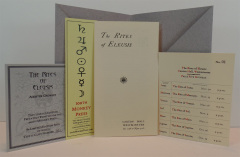