93,
I'm puzzled regarding some aspects of Crowley's Gematria in Liber LVIII. Perhaps someone could provide some hints? I'm using a PDF version, p. 19. (It might be easier, if looking for these places in the text, to just find a digital edition and use the "search" function.)
1) In discussing the Hebrew transcription of "IAO" he says that “the Qabalah will even tell us which is the true Way.” What does he mean?

But first it strikes us that I, A, and O are the three Letters associated with the three Letters [Heh] in the great Name of Six Letters, [Alef-Heh-Yod-Heh-Vav-Heh], which combines [Eheieh] and [YHVH]…. Now these three letters [Heh] conceal the “Three Mothers” of the Alphabet [Alef, Mem, and Shin].

I can't figure out how he derives the three Mother Letters from these three Hehs, or even what brought the 6-lettered Name to mind in the first place. There seem to be missing, though implied, "steps" here. . . .

3) “A is the Pentagram. . . .”
I have never heard this before. Is he just making an imaginative association based on the shape of the letter (which would still be quite a leap), or is there some traditional lore associating A with the Pentagram, or something else?

As mentioned in that other thread just a moment ago, AC had a very loose approach to Qabalah. Like the ape, he casually mixed up Roman numerals with hebrew letters and drew conclusions that are sometimes bewildering. I have not tried to actually answer your question because it makes my head hurt.

Qabalah is a means for "ordering the mind." It's supposed to bring peace of mentat and cnfirmation of "meaningful coincidence." But that only has validity when the equation is simple and obvious. Fiddling with the numbers, their values, and the outcome is just that: Fiddling into the wind.

It's a good thing that there's a point on the path where the mind stops and QBL is valid no more.

In the meantime, maybe somebody can spot the mother letters without the violin.

Thanks Shiva. It's funny because he seems to expect the reader to know exactly what he's talking about there, re. the three Hehs and three Mothers, as if it's not a rather obscure point. Whereas many of the other things he is explaining aren't really obscure at all.

As for the "A", I was reflecting on the pentagram earlier and realized that it is indeed implied by the English letter--the "bar" of "A". The other angles of the Pentagram are as if cut off, but they are hinted at, and a pentagram could be made from the letter theoretically. I suppose this is fair game: AC was at least being consistent in reading the letters of IAO in terms of their suggested shape, rather than gematraic values. . . .

I think the “missing steps” in his thinking are the Golden Dawn doctrine identifying Aleph with the Fylfot Cross or Swastika by its shape (and thereby the sign of of Isis in Mourning in the signs of the formula IAO/INRI), which transforms into the Pentragram with the addition of Shin in IHShVH (YeHeShuVaH, Yeheshuah, Jesus).

The following quote from AC’s paper on the symbolism of the 5=6 grade (written in 1900) in "The Temple of Solomon the King" uses the same group of symbols.

Liber LVIII on Qabalah was written in 1910. You can see him using the same method of substitution with the Mother Letters in Sepher Sephiroth (begun by Allan Bennett, finished with George Cecil Jones, published in The Equinox in 1912, thus composed over at least 13 years).

32
אהיהוה
Coalescence of אהיה and יהוה Macroprosopus and Microprosopus. This is symbolized by the Hexagram. Suppose the 3 ה’s conceal the 3 Mothers א, מ & ש, and we get 358 q.v.

The ampersand standing alone is presumably a typo, and should be “&c”, which means “et cetera”.

Hey Belmurru, thanks for your helpful response! I'm still pretty baffled about where he got the three Mothers for the three Hehs. From what you quoted, he seems to have been acting on a personal inspiration, which is perfectly fine as far as I'm concerned (that's actually part of what I like about the "literal Qabalah"). I just don't see any other explanation. I had never seen that particular substitution before.... 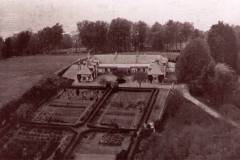