How to Spell FIAOF in full?

I might be missing something very obvious, but I can't figure out how Crowley is getting 309 in MTP.

Unless it contains a hidden Yod like in MUAUM that is alluded to in Liber 777 I am at a loss.

Even when spelling it with both Vau's as FIF only gives 305.

309 is a metathesis of the fire-snake/lion-serpent.

Shin, is both fire and spirit, and it is written that there is indeed one flame missing in shin's orthography, symbolising the lost word and all aetiology of meaning and symbolism thereunto. Ancedotally, Crowley referred to this as pointing unto a great wrong somewhere in history. Teth, is the serpent, and the lion I.e., the shape of the letter and astrological attribution of Leo.

Futhermore, ShT is a metathesis of Babalon and the Beast, the Cup, N.O.X and so on - also all mythotypical and sociological implications concernings of mother and son.

ShT, as far as I conceive, represents the mark of initiatioj I.e., IAO is the mark of the beast A upon the scourged brother O.

ShT, "(Liber Al) ...the coiled splendour," one aspect of which is the fire-snake and hence one rendering of Atu XVI: the annihilation of contraries; destruction by fire; occult knowledge of direct nature as opposed to epistemic- but furthermore ShT is the emrald snake: the coiled serpent, represented by Leviathon, circumscribing the magician's circle. The flaming eye of Set - the magician, at the centre of a circle of fire. This is the glyph (one glyph) of the invocation and firing forth of that magical force par excellence.

the reference for the final paragraph in previous post dealing with "the emrald snake, " and "the eye of Set," is the grimoire: "Midnight's Circle. A commentary of AZOTHOZ - A Book of the Adversary." Bt Akhtya Seker Arimanius - Michael W. Ford.

FIAOF its feeeeauuuuf. or fiauf if you will. its cat language. it means feed me. thats why it deals with snakes and jackals and stuff. cats are god. 😉
or lion serpents if you will.
they make those noises naturally. because their serpentine tails surreptitiously describe arabesques in the sultry scented air as they soliloquy so cutely 🙂
ok now i really deserve to be booted. but i love cats. 🙂 carry on.

I agree with Lovercraft, it should be a crime to hurt a cat.

""Dog people" and "cat people" really do have different personalities, according to a new study.
People who said they were dog lovers in the study tended to be more lively — meaning they were more energetic and outgoing — and also tended to follow rules closely. Cat lovers, on the other hand, were more introverted, more open-minded and more sensitive than dog lovers. Cat people also tended to be non-conformists, preferring to be expedient rather than follow the rules."
- http://www.huffingtonpost.com/2014/05/29/cat-people-dog-people-intelligence_n_5412245.html

I don't remember reading about AC having either a dog or a cat. There was something about killing a cat as a child and a cat sacrifice. What about it? Did he have pets - or did he just collect "specimen-victims" and acolytes?

Crowley kept dogs at Boleskine. Otherwise his life really wasn't suited to looking after a pet.

Unlike Spare, who was often photographed with some around his person, A.C. doesn’t really seem to have been a cat person does he – with his habit of ‘offing’ them, or at least the one on the record.

Yes, he did seem to keep dogs at Boleskine – although how much they were part of the estate there (such as gun dogs, maybe) and how much his own personal pooch and/or lap-dog is open to future discovery.

Didn’t Hitler used to have a favourite German Shepherd called Blondie (although it didn’t seem to stop him feeding her cyanide at the end in order to test its efficacy)?  So maybe he wasn’t particularly a cat person, either.

Not quite sure what all this train of thought goes to prove in the end, though… 😀
Norma N Joy Conquest 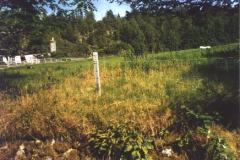