Liber AL Cipher: Adventures in Base 26

So in this way, AUM contains OM.

There is a distinct distinction between AUM and OM, but how can this be true when you have just proved they are = ?

They are equal. Think of a two-way street.

AUM vibrates the symphony of creation:
A (formless) -> U (becoming) -> M (manifested).

OM sounds the return home:
O (duality, devil) -> M (dissolution in the cosmic waters).
(The M must taper off to a hum that grows quieter and you can't tell when it ends).

Thanks for replying to my humble post. That's a pretty cool "formulation" you have given there.

you have just proved they are = ?

You may be being too generous in saying I have really "proved" something, its more of a "neat" coincidence. Really this is all just esoteric "recreational mathematics", I don't know if any of this points to anything important but at least its fun to have go.

You may be being too generous in saying I have really "proved" something, its more of a "neat" coincidence.

The word often used in science, as well as QBL and the courtroom, is "prove" (the equation). You have shown a causal relation between two things. You proved the equation. It doesn't matter how you proved it, as long as someone can follow the logic and the footprints.

Of course, you have not proven something that is absolute, or transcendental, or Earth-ending, because those concepts are acausal, which is Jung's word for "crazy."

Really this is all just esoteric "recreational mathematics", I don't know if any of this points to anything important but at least its fun to have go.

Having fun along the way is an indication that you're on the right track. The purpose of QBL, anyone;s QBL (there are so many variants these days. It's like people are re-writing the Bible) is to Order the Mind. Recreational math is simply working the system, keeping it fresh or refreshed. In martial arts we call it "practice." Doctors call it the same thing. It is well known that if one does not practice on a regular basis, one's skills start running downhill fairly rapidly.

The last one of these "infographics" (thank God, you may say), based on the closing statement of Liber AL (its unclear if its a part of III:75 or not, I consider it its own separate non-verse verse). The letters of "The Book of the Law is Written and Concealed. Aum. Ha" sum to 387 (using A = 0, B = 1 etc). This number then nicely happens to decipher to "OX" when considered a Base-26 cipher (14 x 26 for the "O", + 23 for the "X"). 387 is also nicely 11 more than 376 ("OM"), the number I started this thread with. The Ox hieroglyph is the ancestor of the Hebrew "Aleph" and our own beloved letter A ("Thou shalt obtain the order & value of the English Alphabet"). In this (admittedly quirky) way, the last statement of AL refers to the first letter (the End is the Beginning, if you like). 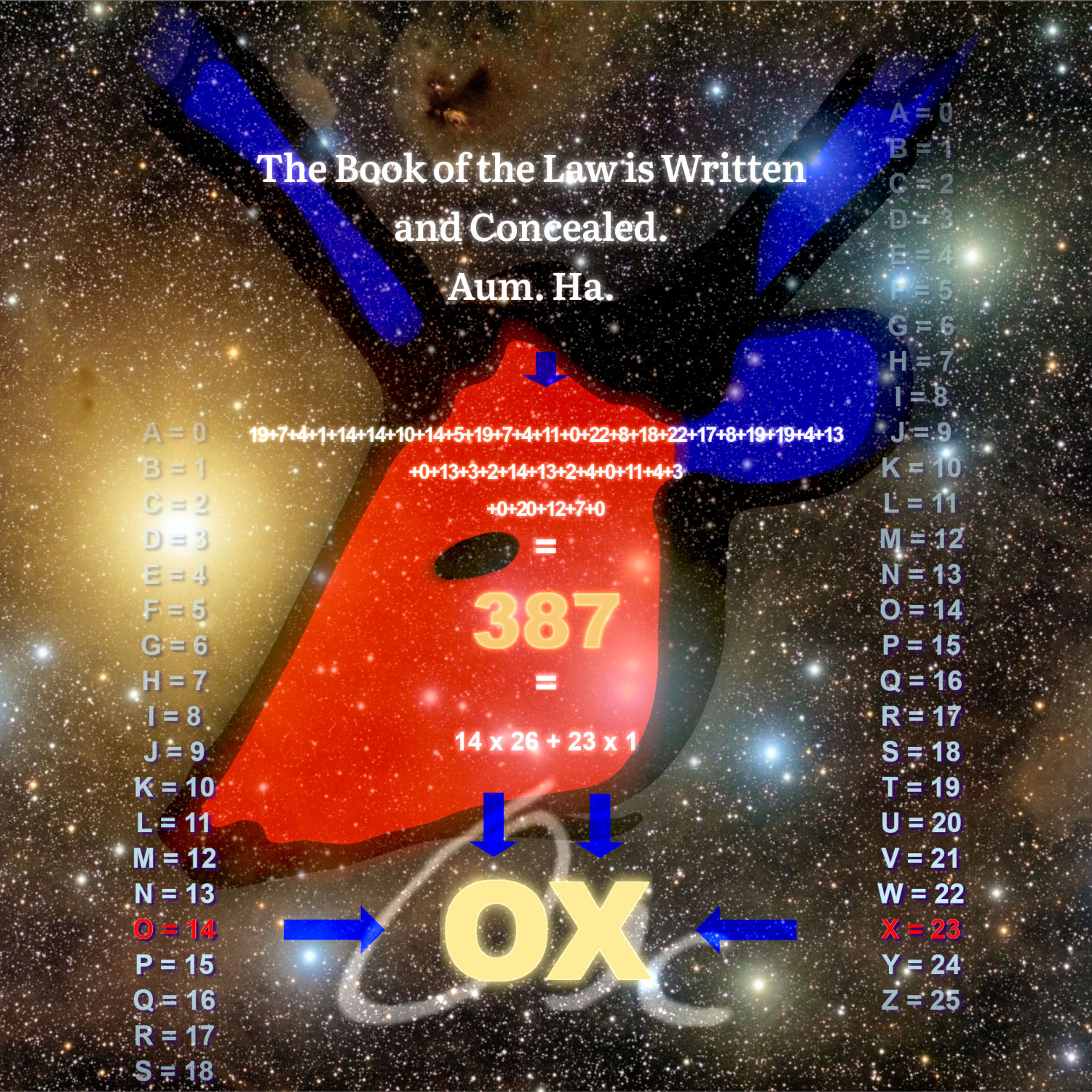