Signs of Liber AL and the Prophet spotted in the numbers

(Disclaimer: I wouldn't be surprised if this has been noticed before but here is my version of it anyway if so)

How about we just divide for now and see what it gets us. The rest can be done later. 😉

Some time ago I made a spreadsheet with the Hebrew numeral value divided by the Atu number for the 22 cards. Those results are interesting to speculate on but this post deals with just the most significant of these, which I only noticed yesterday.

I did some research and asked on another thread for some direct connection between Crowley and the tarot card "The World/Universe". Without this bit of info this post wouldn't have been worth making. I didn't find an interesting enough connection with A.C., but in the end I didn't need this, I noticed a connection with the "Cipher" itself.

From this we can see some significant numbers:

47, the year of the Prophet's "Greater Feast"

So, there is some interesting "symbology" going on here and I hope this is a good example of why us "number-nerds" do what we do. If you were "wacky" enough you could say something like "This is a symbol of the Prophet and his Holy book encoded into the structure of Reality", but that might be a bit silly (or maybe its not? 😳 ).

The results of dividing with the other cards give some interesting figures too and there is more symbolism to be found in them. It may be more meaningful to calculate them yourself (ideally mentally/with pen + paper, I was lazy and used a spreadsheet). I remember @runelogix saying he did something similar but with multiplication, so this may be of interest to you.

The HGA of a Duck

Thank you for the mention. I am not personally much interested in numerology beyond numbers 0-21 but that doesn't mean there isn't value in it. I recently read this that help with a modulo arithmetic primer https://www.academia.edu/38614937/LIBER_ROTA_PART_I_THE_STRUCTURE_AND_ALGEBRA_OF_THE_MAJOR_ARCANA

about 20 years ago I developed the Mayet System from Crowleys work. You may or may not be interested in taking a look and seeing if it has any value for you...

I thought i recognized a certain new poster's writing style! A bit calmer this time, and a good thing.

I see this sort of as a mathematical "sigil" or "glyph". Instead of being drawn, its "carved out" of the number by division. Similar to those signs of God that are found when someone cuts open some fruit.

"Allah" written in a tomato.

I think this one was a hoax, still pretty funny though.

I recently read this that help with a modulo arithmetic primer

Thanks. It mentions a "part 2" towards the end, do you know if that one is available? This was quite relevant to me as I like to look at the remainders of division to see if they are meaningful. I can give you a short example with "THOTH" when converted from base 26 to base 10:

A very nice coincidence as Thoth is the mythical creator of the 365-day calendar. 🙂

Thanks for this. I think I have visited that site before, is it your own? I will read that section soon, I still have Herupakraath's and Shiva's pdfs on my reading list.

@duck I will read that section soon, I still have Herupakraath's and Shiva's pdfs on my reading list.

Firstly.. Happy equinox to everyone from downunder as the sun rises in a beautiful autumn red dawn with a crescent moon not far in front... much different from last year when I had a full moon setting as the sun rose...

Yes I am Maצet I do apologise 4 the site is just as much as a mess as me. Having said that, the section I have linked you to is clean and pure universal mathematics.. I hope you gain something from it that helps you on your pathways...

An update on the number 400 and how its relevant to "the Universe":

The Sun is very close to 400 times the size of the Moon:

The average distance of the Sun from Earth: 149.6 million km

Very close to 400, this figure varies with the orbits of the Moon and Earth, getting closer to 400 and further away from it.

These two figures being almost the same, 400, gives us the effect of the Solar eclipse as it is seen from Earth. 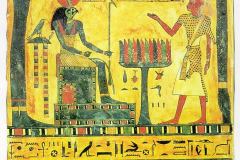