Chaotopia: Sorcery and Ecstacy in the Fifth Aeon. By Dave Lee (Mandrake of Oxford 2006 reprint).

Before i begin my review i want to say that i have sympathy for chaos magick.It has the potential to take and surpass the principles put forward by Thelema to become the "alpha male" of occultism but going by what the main writers in Chaos magick put forward this wont happen for a very long time.

In the foreword to the 2006 edition Lee said that he went over what he wrote previously and decided that it needed an overhaul. Going by the concepts put here, it still needs an overhaul. Critics of chaos magick say that it lacks depth or any genuine spiritual purpose that benefits supposed chaos magicians. Chaotipia will not change the minds of these critics.
the book seems to focus too much on materialisitic issues to the detriment of the more interesting stuff. The first chapter deals exclusively with wealth and money and how its obtained through chaos Magick principles. I was hoping that Lee would have presented a different look at this finite philosophy using chaos principles. But it never got beyond basics. To me this suggests shallow waters being presented has something deeper in principle. One of the redeeming angles of Lees re-edit is he introduces through out the book the concept of the "Eight Circuit Model" which is really a type of NLP/psychotherapy model dressed up in Lees style of wrtitng. I had no problem with this , but his attempts to tie this up with occult principles and Chaos Magick backfired ( in my opinion). He never successfully argued that this Eight circuit Model was relevant to chaos Magick or was applicable to magick or occultism in general. The third chapter "Magic & Sex" is more interesting in dealing with the changing tastes in sexuality in the 21st century and how that applies to a chaos magician who has the ability to change his/her belief system at will. From a Thelemic slant this is very good thought-provoking stuff that will benefit anyone seeking an alternative view on the sex magick issue.

By the time the reader gets to chapter 7 ; Ecstacy and the Quest , the reader is presented with a Chaos take on Hermetic and Thelemic principles. This is where we start to see the weakness in chaos magick when comparisons are made and used with Thelema and the Hermetic off -shoots. Here Lee introduces the concept of "Quantim mind" and attempts to use this theory to argue his flawed view on the Holy Guardian Angel. Bare in mind that Lee hasnt argued why a Chaos Magican would even need an HGA since a chaos magician isnt "enslaved" to such ideas/principles. But then on p158 Lee decides to take on the big boys by quoting Michael Staley from The Mysteries of Lam article. Lee puts forward his take that the "HGA concept seems to be viewed as a vehicle, maybe even a temporary convenience, for the experience of the transpersonal "quantum mind". How Lee comes to this opinion is based upon this idea of the quantum mind's self created structures. In this sense he seems to be taking issue with Grant's view that the HGA is a separate consciousness in its own right. Again this advertises the weakness of the Chaos model when you can pick and choose ideas without any stable foundation, mentally or magickally which cause these types of misguided ideas to form when the time, experience, or praxis hasnt been backed up to justify this. Then from this he brings in the AOS theory of Kia and attempts to tie up Quantum mind with Kia. My feeling he could have done several chapters on this possibility alone but we only get a couple of paragraphs to toy with.

In conclusion this book is good and bad at the same time. The book puts forward some theories that merit further investigation . But there is some opinions put forward has well that show that Chaos Magick hasnt progressed or developed from those early days in the late seventies from Sherwins Pact. Also this book will be used by critics to show whats happens when spiritual eclecticism is promoted over the principles of consistent study, practice and patience. So in that sense the book is worth reading just to compare and contrast the Chaos model with other occult currents.

There is much in Chaos Magick that is useful---and much I think that is “wishful thinking”. It does seem to reflect the concept of having an unfettered mind---but one can be fettered also, by lack of dedication and willingness for hard work applicable to the time honored and proven systems of tradition. I would supplement the more traditional hermetic methods---by a little Chaos now and then; but as a system---CM still seems to lack for much—in its present state.. It does work though!

Many thanks, Zain. I've copied your review to the Reviews section. 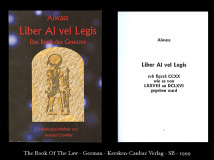