Kenny Everett dodgy politics but zany to the hilt I must admit he was hilarious.

Yes, Zany was the jock's middle name in fact - as in Kenny "Zany" Everett.

Of a more humane Mikado

I was once affiliated with MDE via Jan Rankowski, perhaps the funniest person I've ever known, when I played a minor role in his years long stint as Commander Jace Connors of 'Deagle Nation'. That was the peak of post-ironic comedy, if it isn't too self-serving to say so, but the joke was a little too complex to explain.

I also spoke to Jan awhile after it ended, but he's been out of the game for a few years.

This is the same Sabrina as the Teenage Witch, but this series is far more serious and darker in tone. It is also much sexier, so it might be worth other people watching.

Among the cast is Lucy Davis, who you will remember from The Office. 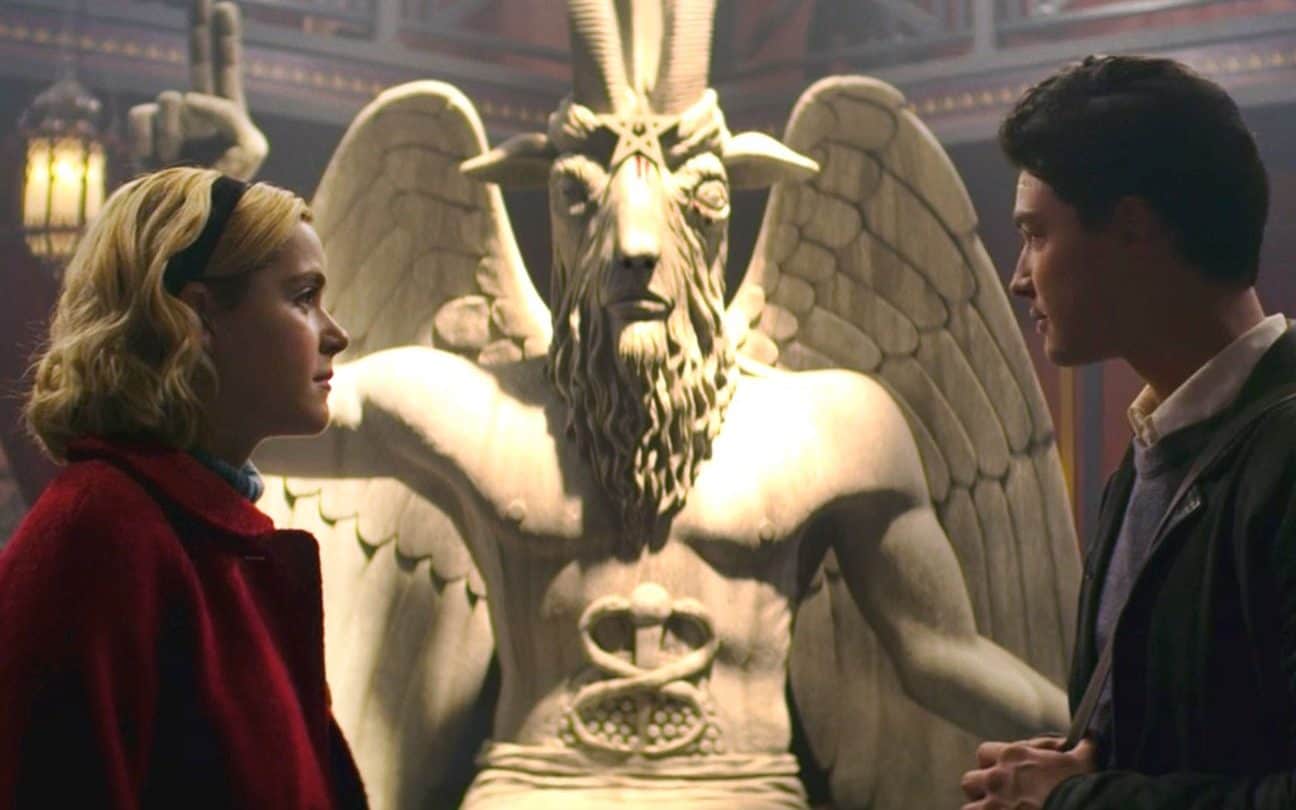 Boobless Baphomet statue settlement didn't kill the show. Satanic Temple must have been reasonable and the show doing quite well. Statue resembles Eliphas Levi's drawing. A seemingly self-evident connection to the site for those familiar with Crowley, but for those not in the know or have forgotten Crowley considered Levi one of his past lives. 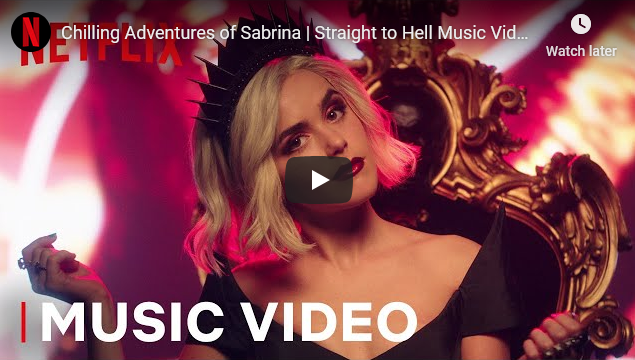 In the comic book which the Netflix show adapts, AC was a secondary character. The pope of the satanic temple or something.

In the comic book which the Netflix show adapts, AC was a secondary character. The pope of the satanic temple or something.

Crowley is mentioned by name in Season 1 Ep. 8 of the show by Ambrose Spellman while he was explaining how he wound up in a plot to blow up the Vatican.

Why are some speech balloons blank?

Why are some speech balloons blank?

I did that myself to stop the plot from being spoiled for anyone. I left what I did so as to leave no mistaking the identity of the fictionalized Crowley. Not that I even know the plot -- I just know AC appeared in the comic book.

I did that myself to stop the plot from being spoiled for anyone.

From the one panel shown with two speech balloons?  Must have been a hell of a spoiler!

Guy on the left: "(Thank you, High Priest Crowley).  Oh, by the way - what is the supreme secret of the IXth degree?"

High Priest Crowley: "Just check out my Book of Lies - you'll find everything you need's all in there.  And I swear to you on my mother's honour, that's the Truth!"

I reckon the first guy says:

"May I ask what you think about Comic Sans?"

"In the future all of my Holy Books will be in Comic Sans!"

Not AC/occult related, just a stupid clip from one of the best worst films ever (starts at 2:13):

Favourite for also having some musical talent, in addition to talented comedic acting:

Ghost's cover of Here Comes the Sun was set to clips from Lucifer Rising and uploaded to youtube. Almost posted it to @duck's thread You Stole The Sun From My Heart. Decided to wait a season for, like Rorschach, there is more than meets the eye. Show yourself!

The band does have a great sense of humour. The video for Cirice is hilarious.

Wow, thanks, 'mal (@xon)'! Hilarious indeed, and I will for 2020 email Ghost's music video Cirice as an April Fools' Day prank to my Xian friends with strong apocalyptic notions:

"Hi, what do you think of the music video Cirice by this rather young Black metal band?"

We have been (for me re-)watching Rowan Atkinson's historical comedy 'Black Adder' in season order. Very hilarious.

It's great to see a lot of the actors repeat, in different eras, as if they are reincarnating.

First season is in a fictional Richard the IV's time in late 1400s , end of the British Middle Ages

Third season is in late Georgian times in late 1700's

"The eyes are open, the mouth moves, but Mr. Brain has long since departed, hasn't he, Percy?"

The small ghoulie on the kettledrum is my favourite. dun dun!

Just finished watching The Good Place and it was a fantastic show. Don't want to give out too many spoilers as it was a treat going into it mostly unspoiled. The premise deals with the afterlife and one's ethical/moral actions on Earth through the lives and afterlives of the main characters.

Not a main character, but this is Doug Forcett. 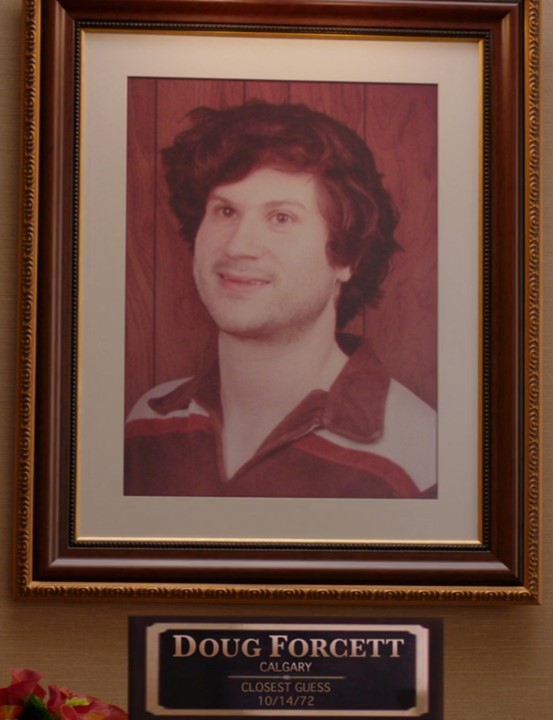 On October 14, 1972, during a magic mushroom trip, he described to his friend Randy the nature of the afterlife to a surprising degree of accuracy — getting it "92% correct," according to Michael.[2]

As a result, he is a celebrity throughout the universe (or at least in the neighborhood setting of the show), and a portrait of him hangs in Michael's office. 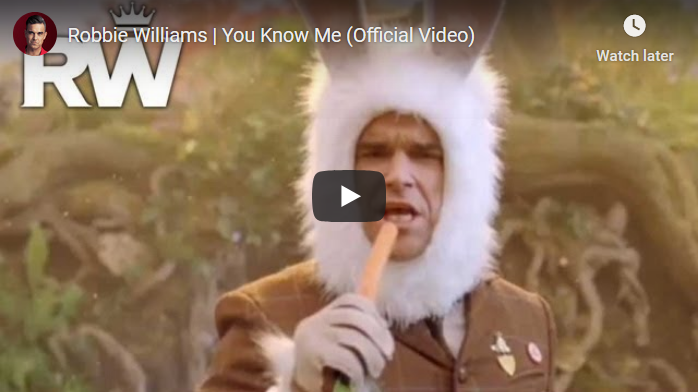 Ah, you found that old thread, I'd almost forgotten about it. That was the only song by that band that I really liked and it was quite amusing to imagine Ra singing it to Jesus. 🙂

there is more than meets the eye

Looking back now, some of those old 80s shows had an almost "Shamanic" effect on me as a kid.

@duck Using music for guided visualization/meditation is wonderful and for doing fun things like you describe. That thread also seemed like a lowkey attempt to re-open the music thread, not that I mind. 😏 The song you posted there was good. There's only one music snob around, so no worries about being bothered about your tunes. After checking on the old music thread just now there's over 5000 views on it since the software update, making it one of the top threads on the site by far and it was locked months ago. 🤭

Shamanic indeed, deep consciousness and foundational of the generation immersed in it. Important to be open to it and others to keep connection as the times change.

Control. The Ugly American. The instrument of Control. 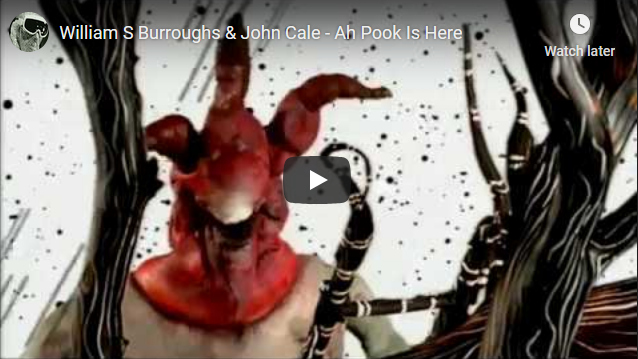 I always like Richard.  Was saddened to hear that he ended up doing himself.   Now that's not funny!  I knew a guy like this in my neighbourhood, sort like Jenni meets Charlie Sheen.  I heard him set up an 'eye-ball' with a girl on the C.B.  He finished the conversation up with "and wear a skirt".  I went to the shop an hour later and the two of them were walking on the other side of the road.