Being an old-fashioned chap who likes real-world books as opposed to kindle-ish things, I'm tempted by this: 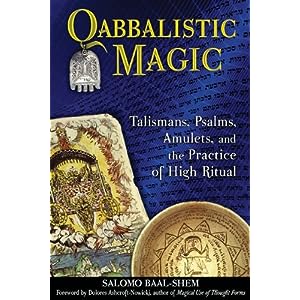 The reviews are good but I don't trust generally trust reviews. Wondered if anyone here has it and could tell me if it's worth the £21 Waterstone's are asking for it?

A search for the author revealed:

Salomo Baal-Shem has been studying and practicing the Western Mystery Tradition for over twenty years. He is an Initiate and Adept of the Western Mystery Tradition, a personal student of Dolores Ashcroft-Nowicki and the Grandmaster of the Brotherhood of the Eternal Light, the Magus of the Lodge Chayot ha-Qodesh and the Director of Studies of the Training Group of Ritual Magic and the Western Mysteries. He was introduced to the spiritual lore of Judaism, the tradition of his ancestors, by his own father. He has studied Philosophy, Judaism and Psychoanalysis at Frankfurt University specialising in the Qabbalah and Hermetic philosophy. He has also studied near eastern archaeology and Assyriology.

Whenever his rather limited time permits he enjoys long walks through the woods and he occasionally practices the ancient craft of blacksmithing on medival fairs."

Also, never heard of the author before today. Maybe someone else has. They may be nice enough to recommend some good literature to you as well. Best of luck.

That will be 21 pounds please. I accept Paypal.

(All links provided are subject to moderation review and possible removal.)

Hell !!! I've just done the best possible posting on Qabbalah and Thelema that I may have ever realised and by some stupid mistaken press of a key, I've deleted it, all too apparently.

Can't go back to building the blocks again, just now.  Mea culpa.  Perhaps it means something ?

Azidonis
(@azidonis)
Member
Joined: 15 years ago
Posts: 2964
31/03/2012 6:11 pm
"Satan'sAdvocaat" wrote:
Hell !!! I've just done the best possible posting on Qabbalah and Thelema that I may have ever realised and by some stupid mistaken press of a key, I've deleted it, all too apparently.

Can't go back to building the blocks again, just now.  Mea culpa.  Perhaps it means something ?

Brings to mind the mandala of the Buddhists. How they spend days making wonderful mandalas out of sand, and then as soon as it is finished, they destroy it with a single motion. The purposes is to indicate impermanence.

Sucks you lost your post though. Hate it when that happens.

Thanks for your response, Azidonis.  Aye, we are all truly, but grains of sand in the rapt and colourful mandala of cosmic experience ! Blown away tomorrow, maybe.

But, to get back to the little stuff.

Have we actually achieved a Thelemic Qabbalah ?  The Naples Arrangement, the various presentations of an 'English Qabalah' - in this latter case rather sad and simplistic affairs in my estimation.

Let us go back a few years.

"The Qabalah, that is, the Jewish Tradition concerning the initiated interpretation of their Scriptures, is mostly either unintelligible or nonsense.  But it contains as its ground-plan the most precious jewel of human thought, that geometrical arrangement of names and numbers which is called the Tree of Life."
A.C. 'Little Essays Toward Truth';  "Man" p.8, (1938).

"No words need be wasted on the subject of Crowley's "Kabbalistic" writings in his books on what he was pleased to term "Magick," and in his journal, The Equinox".
Gershom G. Scholem 'Major Trends in Jewish Mysticism'; p.353, (1941).

As usual in such cases of head-to-head confrontation, (although I doubt that A.C. and Scholem had any more than a passing literary acquaintance), the truth lies somewhere in between.  By 'truth', I mean the creative interface that allows us to make constructive use of an ancient mystical tradition in the light of a New Aeon Gnosis.

(After recent experience, I'm going to save this much now, while I'm doing alright).

"Every Initiate must build his or her own Qabalah." - Crowley

[my words via my unstable memory of what he write]

This is where it gets personal, and open to mixed interpretation.

NU is "nothingness", the Qabbalistic AIN.

Nuit in her self-realisation defines herself as an infinite circle: AIN SVPh.

In which she secretes a secret seed, (The Typhon and Set business), a fulminating focus of light-essence that is Hadit: KThR.

Awakening to self-awareness, Hadit formulates that Lightning-Flash which is the realisation of the Universe, symbolised as a Tree of Life.

"Do what thou wilt shall be the whole of the Law".  Eleven simple steps to Malkuth, where "the law is for all".

And in its corollary, formulated in IVSD, "Love is the law, love under will". Seven less than simple steps that take us to Daath and the confrontation of the Abyss.  Where some of us, the Thelemites possibly, are aware that we are now.  Time to make the Next Step ?

This has not worded itself precisely as I intended; if indeed I had any such prior conception.

Make of it what you will.

The Children of Transgression are the Dragons of the Law.  Explicitly.
ReplyQuote

In total agreement, misquoted or not. S.A.