Androcles and the Lion

I recently picked up King's "Crowley on Christ" which is of course his repackaging of "The Gospel According to St. Bernard Shaw". In his introduction King indicates that Crowley wrote the essay after reading, during his GMR in New Hampshire, an edition of "Androcles and the Lion", in the preface to which Shaw presented his assessment of Christianity. Crowley "infuriated" by what he felt was a prejudiced and selective analysis penned his rejoinder.

My query is:  Does anyone know which edition of "Androcles and the Lion" Crowley had with him in New Hampshire in June of 1916?

Androcles and the Lion / Overruled / Pygmalion / By Bernard Shaw
https://archive.org/details/androcleslion00sha

just the fellow i hoped would answer! Indeed, I suspect it may have been that Brentanos edition as well, though Constable & Co also published one in 1916. But, given that AC arrived in the US at the end of 1914, he probably picked up the American edition.

now to start saving my pennies... I am really fond of "The Gospel According to St. Bernard Shaw". Hopefully Equinox III-2 will be published some day in its entirety...

Within our lifetimes, yes...  Well, it was first announced by the ©.O.T.O. (the “Caliphornian” or “Caliphate” O.T.O.) at the end of the ‘80s (in, I think, The Magic(k)al Link) and then subsequently in the '90s in several other publications they had connections with, that it was all up & ready to go in the form of photo-ready copies of the original galley proofs which had suddenly come to light again.  As well as Liber Jesus sub figura 888 (the other name for the same ‘Gospel’ work) III.2 was to contain the second and concluding part to John St John as its main features plus some other stuff from his ‘American’ period which hadn’t appeared in The International or The Fatherland (but I don’t think a full list of contents has ever been released either?)

There’s been no word on this (nor the other long-ago-announced planned publications, e.g. the complete Confessions) for some time though.  It’s all gone very quiet.

Perhaps they’ve managed to lose it (= the galleys) all over again?! 😮  ;D
Norma N Joy Conquest

Well, they work very slowly- i hear they do one letter at a time.
Even that can be tricky.

You know me, can't resist a bit of bibliographic trivia.

Indeed, I suspect it may have been that Brentanos edition as well, though Constable & Co also published one in 1916. But, given that AC arrived in the US at the end of 1914, he probably picked up the American edition.

Brentano's is what my money would be on. This Via Libri books page (first item) -

Crowley went on his GMR at Lake Pasquaney (Newfound Lake) in late June, which gives him a couple of months to have bought it in (presumably) New York. It is hard to imagine a plausible scenario where he ends up with the Constable and Co. edition.

I wondered if his, no doubt heavily annotated, copy survived, but I can't find it at Harry Ransom or in the Fuller Catalogue. If it has survived, perhaps it was sold at auction and is in a private collection. Breeze or Kaczynski might know, if they are or were involved in the editing of the long-delayed Equinox III,2.

i just picked up a copy (without the dust jacket of course) at ZVAB.  Should be fun to compare!

Reading this morning I came across a passage in which AC is discussing Shaw's attempts to date Matthew's Narrative by its reference to the Second Coming. Part of AC's counter-argument is that there is "no reason at all why a man should not describe his own death and burial" and he goes on to note that he did the same in the 65th Chapter of his Book of Lies.  This inspired me to pick up BoL to find the passage…

"At last I lifted up mine eyes, and beheld; and lo! the flames of violet were become as tendrils of smoke, as mist at sunset upon the marsh-lands.

Thus the disciples that watched found a dead body kneeling at the altar. Amen!

65 is the number of Adonai, the Holy Guardian Angel; see Liber 65, Liber Konx Om Pax, and other works of reference.

The chapter title means, "So may he pass away", the blank obviously referring to N E M O.

The "moon-pool of silver " is the Path of Gimel, leading from Tiphareth to Kether; the "flames of violet" are the Ajna-Chakkra; the lily itself is Kether, the lotus of the Sahasrara. "Lily" is spelt with a capital to connect with Laylah.

jamie barter
(@jamie-barter)
Member
Joined: 9 years ago
Posts: 1688
26/05/2015 6:29 pm
"belmurru" wrote:
I wondered if his, no doubt heavily annotated, copy [of Shaw's "Androcles and the Lion"] survived, but I can't find it at Harry Ransom or in the Fuller Catalogue. If it has survived, perhaps it was sold at auction and is in a private collection. Breeze or Kaczynski might know, if they are or were involved in the editing of the long-delayed Equinox III,2.

This is possible, although it is hard to imagine how far they could be involved in any “editing” if the whole of this edition of III.2 was already in “galley proofs” and therefore theoretically “ready to go” to the printers at any time.  Contents-wise it would already be complete, and so to then tinker about with it any further so that it went against the grain of what A.C. intended to publish might well amount to a dereliction of editorial and scholastic duty.

In the meantime, whilst we are all continuing to wait wait wait it would be at least some crumb of consolation to be able to peruse a full list of Contents so that we can all each put it together as far as we can in our own realisation of the undertaking.  However, to my notice at least nobody has ever made any such list of contents available.  Any ‘secrecy’ regarding it would seem to be unfathomable and wholly unnecessary, though.

Might anyone else happen to be aware of one?

In April 1974 parts of the library of Lady Rose Kelly were auctioned at Christies. Quite a lot of Aleister Crowley firsts, but also some other books. Among those was a 1916 copy of "Androcles and the Lion, Overruled & Pygmalion". It is not mentioned if this is Crowley's annotated copy, but even after being divorced in 1909 she received lots of Crowley's books, I would imagine from him directly, so it could be his.

So far I found no other copy auctioned off.

if you have the auction description, Lutz, does it mention if it was a Brentano's or Constable & Co. publication?

I don't think so.

The books auctioned by Christies in April 1974 were just referred to as the property of 'Lady Kelly'. She would have inherited the books from her husband, Sir Gerald Kelly, who had died in 1972. Her first name was Lilian.

Although Crowley was knighted by 'King' Carlos of Spain for help in some failed rebellion this would not have been recognised as valid in Britain so Rose (Sir Gerald's sister) would not ever have been referred to as 'Lady Kelly'. Besides which she died in the thirties and so would not have had any property in 1974.

At first I suspected that G.Kelly's acquisitions of AC first editions took place before 1916 but I have just reread the catalogue and notice that AC was still inscribing volumes to GK in the late thirties so anything's possible.

OK - in the auction catalogue does it mention the publisher of 'Androcles and the Lion'?  It would be interesting to know which publisher it was. If it was Brentano's then we might assume the volume was bought in the US....

Sorry I can't help there because I don't know. I only have an electronic copy of the first part of the catalogue dealing with the Crowley stuff. I'll defer to Lutz on this.

Thanks OK for the clarification. Unfortunately there is no publishers mentioned, it just says, 1st edition, 1916, dustwrapper and the title of the three works contained. 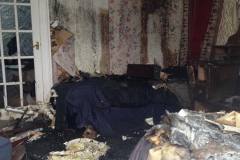