Hi everybody
I have been trying, without even a glimmer of success, to locate a piece by Frater Achad titled "The Alpha and Omega of Initiation". It was apparently published by 100 Monkeys I think in 2006 and again by the Fine Madness Society, but finding copies of these has proved fruitless.

Like I did requested with another piece I was after, does anybody know where I could pick up a copy of this by either publisher, or alternatively does anybody have one that is taking up unwanted space on the bookshelves? I'd be very appreciative of any help.

I would love to see an anthology of this man's writings. The fact that his works are so fragmented is surprising to me. The way that he has been portrayed by many people as having gone completely mad is also something that I find interesting, but is beyond the scope of this request of course.

This essay does crop up from time to time. I purchased a portion of it on ebay a few years ago, from someone who was selling a lot of Universal Brotherhood documents. I'll try and locate the whole thing for you, and PM you if I am successful.

Someone is, I believe, working on publishing a collection of essays by Achad.

It's nonsense to say that Achad went "completely mad". As relations between the two men deteriorated, culminating in a legal severance of relations in the mid 1920s, it suited Crowley's purpose to paint Achad as insane. It was Crowley who reopened relations with Achad in 1936 in connection with the preparation of The Equinox of the Gods, so it's debateable how seriously Crowley took his own allegations. Achad's 1946/1947 correspondence with Gerald Yorke is very even and level-headed. Some of the people around Achad, such as Handel and Kowal - his successor as head of the Universal Brotherhood - rated him very highly indeed, and clealy didn't regard him as a madman.

Thank you Michael, on two fronts.

Firstly, it is really good to hear that his writings are being gathered together. As I alluded to in a earlier post of mine a bio is also well overdue (I am hoping to hear something about Starfire taking this on!!).

And thank you for debunking the "mad" bit. Stories of his supposed madness abound. Take for example the latest Jerry Cornelius essays where he has a potted bio of Achad. In this, Cornelius also alludes to Achad's "typical rambling ideas and views". He further refers to the "insanity [amongst] the pages" of the Egyptian revival (p. 308). It is not a very balanced view. It also suits Crowleyites such as the OTO core to maintain this. Achad was a measured genius, unlike Crowley who could hardly be described as measured beyond his own wants and desires for any length of time. It is writings such as these by Cornelius that maintain this lie either directly or by inference. Things by Cornelius such as "Where did it really start to go wrong with Achad", or, following this in the same paragraph, the leading "In magick, insanity is a double edged sword". On it goes. His essay is littered with slurs such as this. Have a read if you will.

Further to this if one listens to the interview with Achad's son Tony on one of the "Thelema Coast to Coast" podcasts you get a VERY different picture of man who was clearly dedicated to his work but, unlike Crowley, was able to maintain a household, employment, pay his bills and raise a family that didn't descend into chaos. Not to mention a son that remembers him with affection and warmth (I encourage people to dig this interview up and see the caring nature of both Achad and his wonderful wife through their continued fostering of disadvantaged children throughout their lives). The reliable information about Achad does not lend itself to a person who was insane, mad or whatever. His crime was to be too good. And there is only one chair where the throne is. And even that chair wasn't big enough for The Great Beast.

If you can turn up a copy of this Michael I'd love to get a one. Thank you for your reply.

Yes, I also concur that Achad is long overdue for a critical reappraisal and has written some passages of great value in his various works including and especially Liber 31, whilst his Hymns to the Star Goddess encompasses beautifully expressed devotional poetry. However, I've never really explored the matter in any great depth myself, Mazus, but would you be able to vouch for the efficacy of his method/ system of inverting and turning the Tree of Life 'on its head' in terms of attributing the Atus "thereunto", and would you recommend that it bears serious sustained investigation?

Thank you Jamie,
I am have only just recently begun to explore his works and his more dense works such as "The Anatomy of the Body of God" and others require a devotion of cognitive horsepower that I don't have to give at this stage. Works such as QBL and the like stand on their own, and I still think that that is one of best of its type that I have read. The thrust of both mine and Michael's post related more to the truth of reports of madness. Regardless of whether or not his musings with the tree are "true" or not they do not lend any weight to the so called madness that he was supposedly afflicted with. From the reliable sources that I have been able to glean he fits no defintion of madness that I would give credence. And I do madness for a job. Eccentric? Challenging? Maybe. But mad? Nuh. And certainly not because he puts forward an idea that may or may not bear sustained investigation. Perhaps this could be a separate discussion? 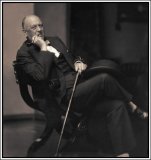