Hi all
This is probably a long shot, but if anybody knows where I could get a copy of this book and direct me to one, or if someone has a copy for sale I'd be more than to pay a fair price.

Fingers crossed, although I realise the difficulty. I can't find a copy for sale anywhere.

It was issued originally on LuLu then pulled. RTC has said it was due to the OTO not wanting the content published. Do not know if that is true or not.
If you want to PM me, I could maybe send you photos of certain pages if you like?

RTC has said it [the pulling/ supression] was due to the OTO not wanting the content published. Do not know if that is true or not.

One thing that jolly well IS true is that we are unlikely to get a comment from the (c).o.t.o. saying so.

Unfortunately the Katz copy had some errors in it which could do with amending by means of a second corrected edition - ideally, a facsimile of each page with a transcript and full editorial annnotations on the one facing, a la The Book Of Lies. This is the sort of thing the (c).o.t.o. should be providing themselves in the (semi-) public interest, responding to the dictates of the market & valid concerns from Thelemites. However I would be prepared to bet high odds that this isn't ever going to happen - is this really because of their "not wanting the content published"? And IF so, would it be awfully paranoid to ask then just WHY and what on earth are they so worried about? At the very least this sort of behaviour can only fan the furious flames of wild speculation!

This might be of a little assistance, @Jamie J Barter @Mazus
http://www.paultoner.com/WORDPRESS/2016/02/16/the-invocation-of-hoor-by-aleister-crowley-contents-images/

Thanks Paul
Its good to get a look at it somehow. A very hard to find book.

I appreciate your efforts. 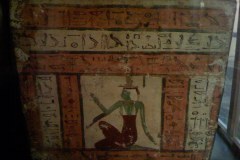