He’s neither poet no a writer
A guy of usual life-living,
In this world he’s just a fighter
He spends his time in poor believing.

What kind of life for him is well?
When he is interested in nothing.
What people like, he finds a hell-
What people hate is really something.

His soul is fiancé, who’s dressed in white,
Waiting for a dream realizing,
She’s counting days ‘til wedding light,
His eyes are full of analyzing.

His soul is far, but body’s here,
He changes nothing in this world,
But he’s against world-living fear,
He’s neither warm no even cold.

There’re only two lines on his hand,
That means that he is poor-fated,
He looks for nothing but the end
Of his own life, he ever hated…

Is this some Crowley's early poetry? Sorry I forgot.

I just wanted to commend you on that poem. I really like it - thanks for sharing!

heh...wow, i was compared with Crowley(!!!) no, dear, this poem was written by myself a few years ago. thanks for comments! 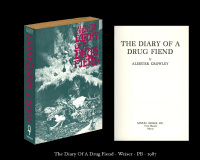