Let's say you have a teenager who has been silently (mostly) observing your interest in this most obscure hobby/interest/passion/personal quest/way of life/etc.  Maybe you have a decent library somewhere in the house.  So at some point maybe your teenager comes to you asking what books she should read if she wants to better understand her dad (in my case) and his most obscure philisophy.  No doubt she has heard you say enough side comments about things/events/people, etc that she has a sense of your philosophy, but now she wants to "go to the source" so to speak.  I could definitely not recommend only one book, and I think it would take a progression of books to give her a sense of the worth that I have found in Thelema.  Bearing in mind that she's a teenage girl, we gotta go a little easy on some aspects of AC...

2.  A Message to Garcia (Hubbard):  Starting to learn about focus and Will

4.  Buddhist Yoga (Kanjitsu Iijima):  This process is a fusion between East and West

5.  The Star in the West (Fuller):  Intro to AC, but also so many poets and concepts

6.  Zen and the Art of Motorcycle Maintenance:  "Quality"

7.  The Heart of the Master (Crowley, finally):  Intro to his conception of the universe

8.  The Kybalion:  Compare and contrast to Heart of the Master

9.  The Power of Silence (Castenada) and all of his books really.  The idea of an "Assemblage Point"

10.  Beyond Good and Evil (Nietzsche) Joy vs. happiness

11.  The Magick of Thelema (Duquette), she'll want to read all of his books after this one, I'm sure

Does anyone have an thoughts on what is missing from the framework/groundwork-ish list?

This topic was modified 1 month ago by EpsilonPiEta
Quote

The Gospel of Sri Ramakrishna and

Autobiography of a Yogi

Then came Castaneda and Grant and Crowley

Autobiography of a Yogi

Your list is more than perfect. I just simply think life doesn't work that way.

I am not father myself, so I can't understand that side of the case. I see you are a great & loving father, but... you know how strange the ways of life could be, even more if one is trying to perform the Great Work.

So let's say your daughter, after reading all the books from your list (& a few books aside) decide to start with the practices. Even now, while we are doing this forum thing, her HGA is watching after her. See, you are just her HGF (Holy Guardian Father).

I'd just add to the list Diary of a Drug Fiend (AC). These strange times we all live in, may lead to some strange things, you know it. Other than that I really have no idea.

I hope I've made sense, and I apologize for my Tarzan English.

Thank you.  Life IS random, but I can only let my love shine and hope it hits its target.   (Like a candle it shines in all directions.)   If my love doesn't hit the target, it will still be there for her and it might also hit another target.  🙂  Every night when I tuck her in, I sing a little song I made up, then blow her a kiss... which she catches with her hand and places on her heart... I can't remember if I taught her that move or if she taught me that one!  🙂    Surely Nuit taught us both!

I can only let my love shine

Absolutely agree with you. In fact, I think you cannot do much more than that to your daughter.

Surely Nuit taught us both!

Indeed, it was Nuit. Plus she has given to you that degree I mentioned above, Holy Guardian Father. Or you maybe prefer something even more sacred: Daddy Cool ?

I can not say what might appeal to a teen girl, but  my partner, who is not a fan of AC, but the spiritual life is the life, with lots of books, and it was Be Here Now by Ram Das that was an important invitation to her...seeking more and certainly giving still.....!

Anyways I, like others as a teen, was drawn to Castenada's work and and yogic texts as what could be found...

I had a copy of the Dover edition of Magick in Theory in Practice as a teen, but remember that it had a fascination and repulsion at the same time, where with each successive year i would open it up, and be able to grok a but a bit more....I note that my mother never said anything about the book....and there became a time where the theory lent itself to the invitation to the practice as found in the appendix. I always liked the cover of that edition with Crowley looking up through hands in a prayerful clasp infused in light. As well the god forms would have an impression from the theory of seeing them to the practice of so assuming!

I will say, as Hesse has been mentioned, that I  agree and will add to that list, as I was profoundly touched by the short novel called Demain. Nine was the Bantam Doubleday Dell mass paperback, that i highly suggest,  as there is a wonderful illustration on the cover that has three human figures with a hawk emerging in the background. It is a seminal coming of age novel from 1919, mystical dreamy and a Ra Hoor Khuit powerful presence, in a way,  that emerges in the life psych of a very sensitive young man.

It is a very relevant book and well worth anyone's reading, or rereading as the case may be...

I then read Narcissus and Goldmund then on to Siddhartha....the Glass Bead Game.. a work in progress, while the Journey to the East, well an essential metaphor to orient by!

To add a bit of clarity for my purpose in building this list:

In college I had a friend with "Do what thou wilt" tattoed on his arm. He was insistent that it was a license for him to do whatever he wanted. I was young, but I knew he was wrong on one level and absolutely right on another level. He was a bit of an anarchist, and a really cool dude. I had another friend who was unable to deicde how to carry our her will, so she needed detailed guidance. She was a "joiner" and needed others to tell how to pursue her HGA. I think this can be a trap, always needing some guru or group to tell you how to pursue your will. So my interest in highlighting these books for my daughter, is to empower her to decide for herself how she wants to spend her energy for the highest purpose she can conceive as right for her (i.e. do her Will). My only prescriptive guidance on this is that "joy" (in the Nietzschian sense) should be our only compass in determining our highest potential/Will. (Others may disagree with this, but we all can't announce thw word of a new aeon 🙂 and we shouldn't pretend that our will in this life should be 9=2, etc, if that's not where we're at.) Maybe it's science or writing that will be her ideal.

1. The Gospel of Sri Ramakrishna (Nikhilananda)
2. Autobiography of a Yogi (Yogananda)
3. Demain/The Glass Bead Game/Journey to the East (Hesse)
3b. (The Glass Bead Game reminds me of the "Quantum Nietzsche" series by Plank. So that gets honorable mention.)
4. Diary of a Drug Fiend (AC) - This reminded me a lot of an F. Scott Fitzgerald novel. (Not a bad thing.)

Other add on's I would throw out there would be:

@epsilonpieta I found Regardie's Tree of Life and Dion Fortune's The Mystical Qabalah both very helpful in my formative teenage years. The recent edition of The Tree of Life edited and annotated by the Cicero's published by Llewellyn contains a lot of useful additional material in footnotes and a substantial glossary. To get going on the practical side I would recommend D.M.Kraig's Modern Magick, a lot of it is take it or leave it for me but I think he does present the primary techniques of the Golden Dawn very clearly along with enough to keep a ritual  magician going for quite a while. Vivekenanda's Raja Yoga also got my mental muscles pumping with it's insights into consciousness and meditative states. Godspeed.

I was once a teenager interested in magick and I would say the first thing that appealed then was the tarot deck. I have to say I was a weird kid and living in a house where all books were available to me, including the Marquis de Sade whom I found boring or the Grand Albert grimoire.

Have you thought of comics? Grant Morrison? Alan Moore?

Books about mythology (I was surrounded by mainly Greek and Roman mythology from a young age), books about symbology, some art books.

That's what I grew up and what eventually drew me to AC. When I was a wee lad, honestly Crowley was too complex to read in terms of being introduced into "magick". I found "Modern Magick" by Donald Michael Kraig to be an easy introduction to the concepts. It was after that read that I was able to dive into Crowley and others. "Modern Magick" is truly a 'magick without tears' kind of an introduction.

I was once a teenager interested in magick and I would say the first thing that appealed then was the tarot deck.

Agree, I see already that my daughter likes several of my decks.  So maybe sooner than later I should buy her a deck of her own... I started with a Waite (golden dawn) deck in college, but now usually use the Crowley/Harris deck.  I also have a newer "alchemy" deck that I really like, but I seem to remember that it's "old aeon" Tzaddi/star speaking... but honestly I'm not sure how much that matters... until much later.

When I was a wee lad, honestly Crowley was too complex to read in terms of being introduced into "magick". I found "Modern Magick" by Donald Michael Kraig to be an easy introduction to the concepts.

Agree that jumping right into Crowley could be too much for an early teen.  For me, it was Regardie's Middle Pillar.  I read that at about 15 years old and was hooked.  I did read Modern Magick (loved it and still have it on my book shelf).  I guess for me the thing that put me on the path even before Middle Pillar, was seeing a ghost when I was about 8.  In hind sight, what I actually saw was probably a towel hanging on a vacuum cleaner! ... but when my child mind saw ... that ghost, well it became permanent fodder for "the shadow" which came to haunt my dreams for a long time.  Life is funny that way.  Illusion can be so much stronger than "truth". 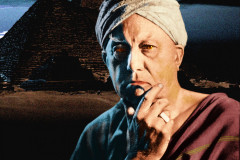