"[Cf. the Coat-of Arms of the family of the Author of this book.]"

I wondered if I should post this under the category 'Biography The life of Aleister Crowley' or under the category 'Thelema What is Thelema? What are the Lion and the Eagle? What is the acrostic of one of Crowley's lady friends doing inside a Holy Book?!', but decided to post it under the latter.

In his The Book of Thoth, Crowley concerning the trump XIX. THE SUN, writes the following:

"This card represents, in heraldic language, "the Sun, charged with a rose, on a mount vert". [Cf. the Coat-of Arms of the family of the Author of this book.]" Source: The Book of Thoth, The Atu (Keys or Trumps) - http://hermetic.com/crowley/book-of-thoth/atu.html

Does the said Coat-of Arms represent the the Coat-of Arms of the family of Crowley, in the sense of referring to "his spiritual family of fellow Thelemites"?

The image below is of the trump XIX. THE SUN in Crowly's Thoth tarot deck:

I believe it's just the blazon or crest of the name Crowley:

"On a mount Vert, a sun Or, charged with a rose Gules"

Crowley must have made his own Family Crest, as it should be  a blue Wild Boar surrounded by Red Crosses of Lorraine.

He seems to have taken the Quaker Crowleys (originally of Stourbridge) as his ancestors rather than the Irish ones with the boar and crosses. His genealogy back to the prolific Thomas Crowley (c. 1713-1787), who broke with his own Quakerism, is certain (see, e.g. Kaczynski, Perdurabo, pp. 3ff). But I haven't been able to find Thomas' own parents.

Perhaps Crowley had his reasons for linking him to the Quaker (Sir) Ambrose Crowley, who was granted these arms on 14 June, 1707. See for instance Henry Sydney Grazebrook, The Heraldry of Worcestershire (1873): 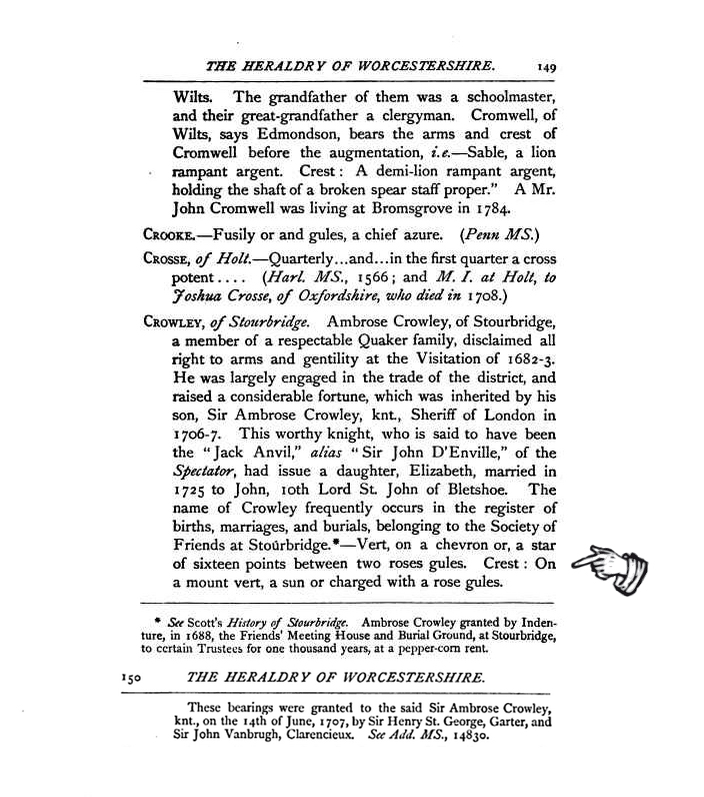 Aleister Crowley's own father broke with his traditional Quakerism in becoming an Anglican, and then a Plymouth Brother. Crowley himself invokes his "Quaker ancestors" occasionally (e.g. Confessions, p. 458).

The link is not implausible. Thomas Crowley could have been Ambrose's son.

Another online source, attributing the arms as "Crowley, of Barking": http://goo.gl/SrY5P2
Made without comment as to whether AC may have been a hereditary madman, with Barking ancestors.
Can anyone find a visual representation of this rather nice sounding blazon (other than the Thoth deck version)?

wellreadwellbred
(@wellreadwellbred)
Member
Joined: 9 years ago
Posts: 1015
03/12/2014 8:49 pm
"ptoner" wrote:
Crowley must have made his own Family Crest, as it should be  a blue Wild Boar surrounded by Red Crosses of Lorraine.

I suggest that this thread also also take into consideration what ptoner refers to above, the Irish Crowley's.

"belmurru" wrote:
He seems to have taken the Quaker Crowleys (originally of Stourbridge) as his ancestors rather than the Irish ones with the boar and crosses.

Also, I I concur with ignant666, I think that some more visual representations would be nice to have available on this forum.

I resource I used for research on my own family "Coat of Arms" was based on this publication.

Crowleys have a few Coats of Arms in it. Though the "Stourbridge" clan ties up with @Ignant666 post.

I just thought that as AC actually said that he had Irish decent, so I stuck with the Coat of Arms, I thought applied.

Just to be clear, throughout we have been using heraldric terminology a bit loosely following on Crowley's ambiguous reference.
A "coat of arms" means the stuff on the escutcheon or shield- in the case of the arms AC asserted were his, this would be "Vert on a chevron Or, a star of sixteen points, between two roses Gules", although "coat of arms" can also be used loosely (as AC does) to refer to the assemblage of escutcheon, helm/coronet/crown, crest, supporters if any, and motto, which is more strictly termed an achievement.
The part AC refers to is the "crest", which appears above the shield representing the arms, and typically above a helmet, or for nobility, the crown or coronet appropriate to the title.