There are four gates to one palace; the floor of that
palace is of silver and gold; lapis lazuli & jasper are there;
and all rare scents; jasmine & rose, and the emblems of
death. Let him enter in turn or at once the four gates; let him
stand on the floor of the palace. Will he not sink? Amn. Ho!
warrior, if thy servant sink? But there are means and means.
Be goodly therefore: dress ye all in fine apparel; eat rich
foods and drink sweet wines and wines that foam! Also, take
your fill and will of love as ye will, when, where and with
whom ye will! But always unto me.

To me they bring to mind the Yantras and Mandalas of Hinduism/Buddhism:

They can also be represented in 3D like this "Kalachakra Mandala", literally a "palace with four gates".

Other passages in Liber AL also relate to the number four:

II:78 "They shall worship thy name, foursquare, mystic, wonderful, the number of the man; and the name of thy house 418"

III:49 "I am in a secret fourfold word, the blasphemy against all gods of men"

The four "ordeals" of III

64. Let him come through the first ordeal, & it will be to him as silver.
65. Through the second, gold.
66. Through the third, stones of precious water.
67. Through the fourth, ultimate sparks of the intimate fire.

Someone also pointed out the four "purities" of Liber AL (instances of the word "pure" followed by a noun):

It was a nice find, well done whoever that was.

The first section of this verse is connected with the second only by the word 'therefore'. It appears to describe an initiation, or perhaps The initiation, in general terms. I would suggest that the palace is the 'Holy House' or Universe of the Initiate of the New Law. The four gates are perhaps Light, Life, Love, Liberty — see "De Lege Libellum". Lapis Lazuli is a symbol of Nuit, Jasper of Hadit. The rare scents are possibly various ecstasies or Samadhis. Jasmine and Rose are Hieroglyphs of the two main Sacraments, while the emblems of death may refer to certain secrets of a well known exoteric school of initiation whose members, with the rarest exceptions, do not know what it is all about.
The question then arises as to whether the initiate is able to stand firmly in this Place of Exaltation. It seems to me as if this refers to the ascetic life, commonly considered as an essential condition of participation in these mysteries. The answer is that "there are means and means", implying that no one rule is essential. This is in harmony with our general interpretation of the Law; it has as many rules as there are individuals.
..............then there's about nine paragraphs on sexual morality blah blah etc etc

Not suggesting you are saying this but mandalas are not unique to Tibetan Buddhism, here are some specifically Roman examples. The verse number 51, is the Tri-key gematria value of Spirit, the fifth element. The four gates signify the other four classical elements. Silver, gold, lapis lazuli (blue), jasper (red), are colors that equate with the four elements. The various symbols described in the verse are meant to stimulate the five senses: Sight/Fire, fine apparel, Taste/Water, rich foods and sweet wines, Smell/Air, rare scents, Touch/Earth, fill and will of love. The only stimulus missing is that related to Hearing/Spirit, which is achieved by uttering the word AUM, a word that expresses the ultimate state of consciousness.

When I first read that verse, it made me think of the four entrances to the courtyard of the fabled King Solomon's Temple. That Temple is a major focus of Christianity, Judaism, Islam and Freemasonry.

The next part reinforced my mental image:

the floor of that palace is of silver and gold; lapis lazuli & jasper are there; and all rare scents; jasmine & rose...

That reminded me of the description of Hiram Abiff, who was

...skilled in work with gold and silver, bronze and iron, stone and wood, purple, blue, and crimson yarn, and fine linen.

Although there is also a small similarity with Genesis.

lapis lazuli & jasper are there

bdellium and onyx stone are there.

However, I think you have a much better analysis of the Liber 220 verse. Thanks for posting it here.

I said I had this post planned in another thread in response to @djedi and @kidneyhawk:

Its good to see that there's an audience for video game related occult material here. I have a rather nerdy post planned that will require some video editing, I hope to get round to it after I get this vector-Stele done.

Also in response to @runelogix in this thread:

I'm usually too lazy to make many "high-effort" posts but I have one of these planned involving the 3x3x3 cube, hopefully soon.

Well I got it done and here's the youtube link (only 1:53 mins so won't waste too much of your time):

I used to waste a great deal of time playing Minecraft (in short its a game where its world is made out of blocks and you build stuff out of blocks), not so much these days though I found a new use for it as way to visualise numbers by forming them into shapes with these building blocks. It helps to give a feel for them by actually seeing them as objects. This kind of thing has always been done (arranging pebbles, the abacus etc), Minecraft (or 3D graphics in general) is just a new way using technology that is available today.

Using Minecraft in this way is basically the same as what's known as "Haűy Construction" and apparently goes as far back as Euclid:

To explain how I use Minecraft as a numerological tool: a number is represented by that particular number of blocks, I then experiment to find the most aesthetically pleasing arrangement, preferably one with the most lines of symmetry as possible. With the example of 418, seeing as its 19 x 22 we can find arrangements for each number individually and them combine the two:

And there you have it, a fun new fact about 418 that was previously hidden away, now easily found with today's tech.

When I first read that verse, it made me think of the four entrances to the courtyard of the fabled King Solomon's Temple.

It also bring to mind the New Jerusalem mentioned in Revelation with its mention of gemstones, and 12 gates with 3 in each quarter.

However, I think you have a much better analysis of the Liber 220 verse.

Your analysis is equally valid, in fact I'd say the "four gates to one palace", Mandalas, King Solomon's Temple, the New Jerusalem and even the above representation of 418 all point towards the same thing. 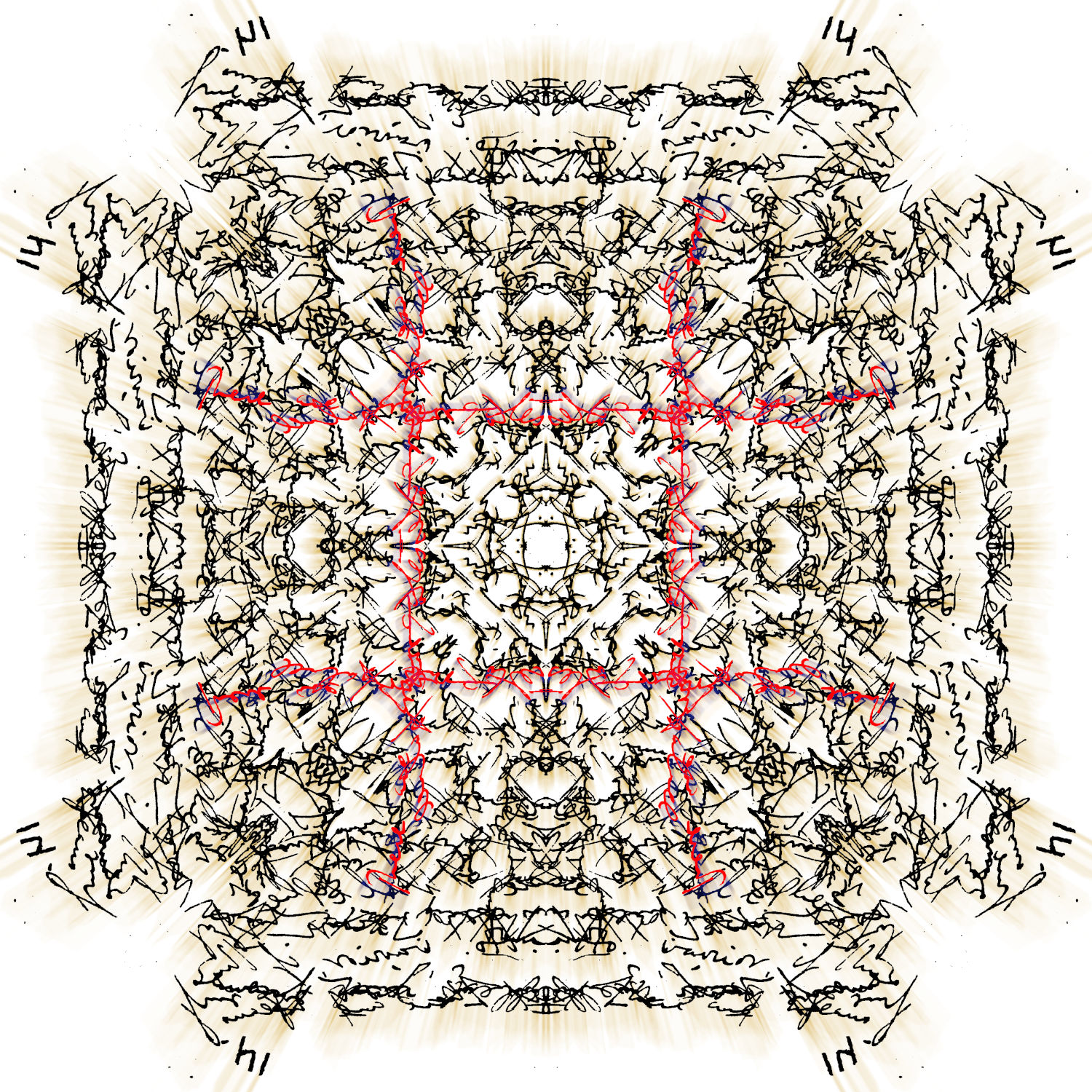 Your machinima is wonderfully smooth and so well done! It was a delight to watch!

Your screenshots are also quite nice. I am fan of the gamespace screenshot as a type of photography.

In fact, AIVAS = 78, a computation Crowley later regarded as an “error” (replacing it with the tortured OIVZ to clock in at a convenient 93). I thought the original Gematria was quite illuminating (and the Book itself would bear testimony to the importance of the Tarot as a symbol system in relation to the Initiatory Path of the Individual, Species and Planet).

Within the 22 Key Super Structure, 19 is of particular importance to Thelema as it is the SUN (Tiphareth/Will and the Beastly Solar Logos who proclaims it).

418 thus manifests via Duck's Pythagorean Pixels as a very interesting virtual Palace of the Sun. Its Four Gates may be the four Jungian Quadrants which surround the central Star (our personal or individual linkage point into Cosmic Will).

Your machinima feels like an in-development test run for a gamespace with spiritual and/or magical application (and perhaps you WILL go on to do this via a Minecraft server).

Is it geometrically possible to build those structures with those numbers without using cross shapes? 🙂